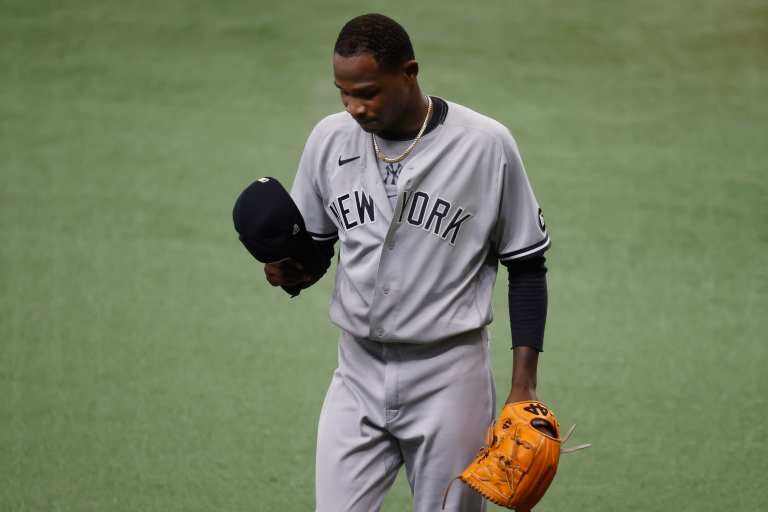 Tonight the New York Yankees renewed their rivalry with the Boston Red Sox at Fenway Park in Boston. Martin Perez of the Sox faced Domingo German of the Yankees. It was a beautiful night in bean town with a game-time temperature of about 68, and the game was played under sunny skies. Before the game, the Sox celebrated the career of iconic second basemen, Dustin Pedroia. The Yankees lost the game 5-3.

DJ LeMahieu led off for the Yankee and ground out on the first pitch. Aaron Judge hooked one down to the Pesky pole for the second out. Gary Sanchez stuck out for a fast inning for Perez. At the bottom, Michael Chavis faced Domingo German and singled to right. Alex Verdugo singled down the middle. JD Martinez flew out to Judge in center holding the runners. Chavis stole third. Xander Bogaerts doubled, driving in Chavis and Verdugo for the early two-run lead for the Red Sox. Rafael Devers went down on strikes. Hunter Renfroe hit one off the green monster, and that drove in Bogaerts for the three-run lead. Kike Herandez struck out, but the Red Sox did the damage with 3 runs scored. Red Sox 3 Yankees 0.

Giancarlo Stanton led off the second inning by walking. Luke Voit singled up the middle as Stanton moved to second. Gleyber Torres went down on strikes. Gio Urshela singled to load the bases. Miguel Andujar went down looking. Clint Frazier walked in a run. LeMahieu had a two-run single to right, and two Yankee runs scored to tie up the game at 3. Judge ground ou to third, but the Yankees matched the Sox and tied the game. At the bottom, Christian Vazquez singled. Marwin Gonzalez went down swinging. Chavis flew out to Frazier in right. Verdugo grounded out to end the inning. New York Yankees 3 Red Sox 3.

Gary Sanchez led off the third inning by grounding out to third. Stanton singled to left. Luke Voit singled, moving Stanton to second. Torres’s struggles continued as he hit into a double play ending the half. JD Martinez led off the bottom by walking. Martinez went to second on a passed ball. Bogaerts flew out to Andujar. Devers hit back to the mound, but German bobbled the ball, and Devers reaches, and Martinez went to third. Renfroe flew out to Judge by the sac fly, scored Martinez. Hernandez ground out to third. Red Sox 4 Yankees 3.

At the top of the fourth, Gio Urshela hit one off the green monster for a double. Andujar singled, and Urshela took off for home but was out at the plate. Frazier flew out to center. LeMahieu faced the new pitcher Hiro Sawamura and hit into the force to end the half. Vazquez led off the bottom, and he flew out to Frazier. Gonzalez hit back to German, who fielded it. Chavis flew out to Andujar at the green monster to end the inning. Red Sox 4 Yankees 3.

Aaron Judge led off the fifth by hitting one deep but for an out. Sanchez walked. Stanton struck out swinging for the second out. Then, Luke Voit went down on strikes. At the bottom, Verdugo faced Lucas Luetge, and he ground out second. Martinez popped out to LeMahieu. Bogaerts flew out to Judge in front of the left-field wall to end the inning. Red Sox 4 Yankees 3.

At the sixth, Gleyber Torres led off and ground out to short. Urshela was out swinging. Andujar singled to right. Frazier struck out swinging as he continued his slide. Devers led off the bottom and struck out swinging. Renfroe walked. Hernandez swung and missed. Vazquez walked, and that did it for Luetge. Gonzalez faced the new Yankee pitcher Jonathan Loaisiga and flew out to Judge in center to end the inning. Red Sox 4 New York Yankees 3.

It was the top of the lineup for the Yankees in the seventh inning. DJ LeMahieu led off by grounding out to Devers at short. Judge also grounded out to Devers. Sanchez ground out for a quick half for Whitlock. The bottom of the inning saw Chavis at the plate; he reached on a wild pitch. Verdugo went down on strikes. Martinez went down on strikes. Bogaerts struck out for a four-strike-out inning, only the third time it has been done in Yankee history. Red Sox 4 New York Yankees 3.

At the top of the eighth, Stanton faced ex-Yankee Adam Ottavino and struck out. Voit stuck out against his former teammate. Torres lined out to center to end the half. The bottom was led off by Devers facing the new Yankee pitcher Zack Britton, and he popped out to LeMahieu in shallow center. Renfroe at the plate he left the mound with an injury had he hobbled back to the dugout. Renfroe faced the new Yankee pitcher Luis Cessa and walked; it was charged to Britton. Hernandez ground out to Urshela, with Hernandez moving to second. Vazquez got a base hit to center, driving in Hernandez for the 2 run Sox lead. Gonzalez singled to left, moving Vazquez to second. Chavis struck out, but the Red Sox got an insurance run. Red Sox 5 New York Yankees 3.

With last licks on the line for the Yankees, Matt Barnes, the Sox closer, faced Gio Urshela, who got an infield single. Miguel Andujar singled to left, moving Urshela to second. Tyler Wade was pinch-running for Andujar. Frazier struck out on a good at-bat. Urshela left the game and was pinch-run by Brett Gardner. Lemahieu hit into a 6-4-3 double play to end the game and give the win to the Boston Red Sox. The winning pitcher was Garrett Whitlock, the loser was Domingo German and the save went to Matt Barnes.

Yankees preparing to lose out on another top shortstop, starting pitching is an issue
New York Yankees

Yankees lose out on one of the top shortstops, Cashman is taking a risky approach
New York Knicks