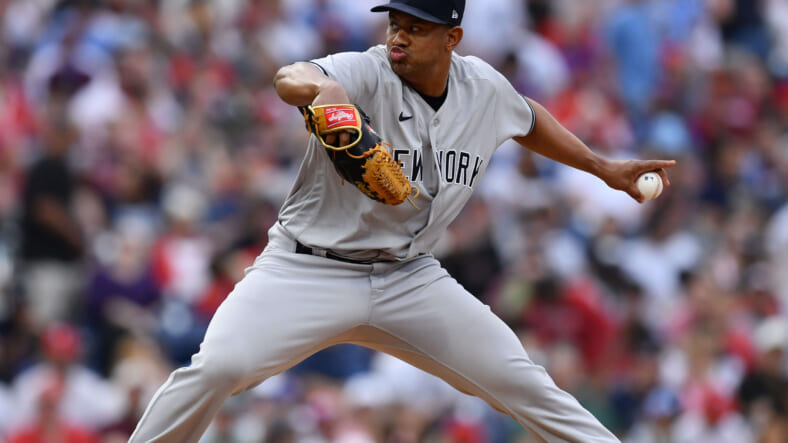 The New York Yankees entered this third game with the Baltimore Orioles, hoping for the sweep of the Camden Yards team. It was the last time this season that the Yankees met up with the Orioles. If the Yankees got the sweep, it would be the Oriole’s 100th loss of the season. Tonight’s game had Jordan Montgomery on the mound for the Yankees and Chris Ellis for the Orioles. The game ended with Austin Hays getting the walk-off chop in the tenth giving the Orioles the 3-2 win.

The first inning had last night’s hero Brett Gardner leading off for the Yankees; he walked. Giancarlo Stanton popped out to first. Aaron Judge struck out swinging. Anthony Rizzo flew out to right field to end the scoreless half. At the bottom, Cedric Mullins led off and struck out bunting. Ryan Mountcastle flew out to Gallo in right field. Austin Hays struck out with the Orioles going down in order. No score.

Gleyber Torres led off the second inning by striking out swinging. Joey Gallo blasted a homer off the wall of warehouse C beyond right field. Gary Sanchez walked. Tyler Wade also walked. Gio Urshela doubled with Wade going to third and Sanchez scoring. Gardner popped out. Giancarlo Stanton ground out to second, but the Yankees went ahead two runs in the game. At the bottom, Anthony Santander singled. Ramon Urias struck out swinging, with Santander going to second. Ryan McKenna struck out. Santander advanced on a passed ball. Pat Valaika flew out to Stanton in left to end the inning and strand the runner. Yankees 2 Orioles 0.

Aaron Judge led off the third, hitting the first pitch for a fly out to right. Rizzo walked. Torres popped out to right. Gallo lined out to first to end the half. At the bottom, Austin Wynns struck out swinging. Richie Martin singled to right-center. Mullins singled to shallow right. Mountcastle struck out. Hays ground out to first standing to Orioles runners. New York Yankees 2 Orioles 0.

Brett Gardner led off the fifth inning by lining out to center. Stanton singled to center. Judge struck out swinging. With the lefty Rizzo up, the new Orioles pitcher was Fernando Abad. Rizzo doubled with Stanton going to third. Torres intentionally walked. Gallo gave it a ride, but it was caught at the centerfield wall stranding two Yankees runners. At the bottom, Wynns led off and struck out. Martin struck out for Mongomery’s 11th of the game. Mullins singled. Mountcastle at the plate, Mullins was caught stealing to end the inning. Yankees 2 Orioles 0, and it was an official game.

At the top of the sixth, Gary Sanchez faced new pitcher Dillion Tate and struck out. Wade singled to right. Urshela ground into a double play to end the half. At the bottom, Mountcastle hit a homer to bring the Orioles within one. Hays popped out to Rizzo at the screen. Santander stuck out for Montgomery’s twelfth strikeout. It was the first time that Yankees pitchers in consecutive games had 11 or more strikeouts. Urias walked. McKenna up signaled the end for Montgomery. McKenna faced new Yankee pitcher Albert Abreu and was pinch-hit by DJ Stewart, who struck out to end the inning. Yankees 2 Orioles 1.

The seventh inning was led off by Gardner, who tapped back to the pitcher. Stanton reached on a single off the umpire. Judge ground out to third. Rizzo tapped out to third for the final out. Valaika led off the bottom and singled up the center. Wynns struck out. Martin flew out to Gallo in right. With Mullins coming in, the Yankees brought in pitcher Joely Rodriguez. Mullins hit into the force. Yankees 2 Orioles 1.

Gleyber Torres led off the eighth against Conner Greene by singling up the middle. Gallo went down on strikes. Torres trying to steal second was out. Sanchez walked. Wade went down swinging. At the bottom, Mountcastle faced Clay Holmes and ground out to second. Hays flew out to Gallo in right. Yankees 2 Orioles 1.

Clay Holmes blew his first save of the season in the ninth inning, allowing Gutierrez to score the tying run. Clay Holmes got wild. He threw a pitch over catcher Gary SÃ¡nchezâ€™s head to put the pinch-running GutiÃ©rrez on third, and Pat Valaika advanced the runner with a hit to the left-field that marked the second out. Catcher Austin Wynns went down to his last strike, but Holmes this time threw one to the backstop again, with GutiÃ©rrez narrowly beating the throw home that tied the score.

Wandy Peralta took over in the bottom of the tenth and allowed two more Orioles hits. The Yankees walked Cedric Mullins to load the bases before Ryan Mountcastle struck out bringing Hays to the plate. Hays chopped a 3-1 pitch from Wandy for the walk-off winning run off of Peralta. The final score was the Baltimore Orioles 3 and the New York Yankees 2. The winning pitcher was Cole Sulser, and the loser was Wandy Peralta.