New York Yankees News/Rumors: Should the Yankees consider Brad Miller if they can’t sign DJ or others? 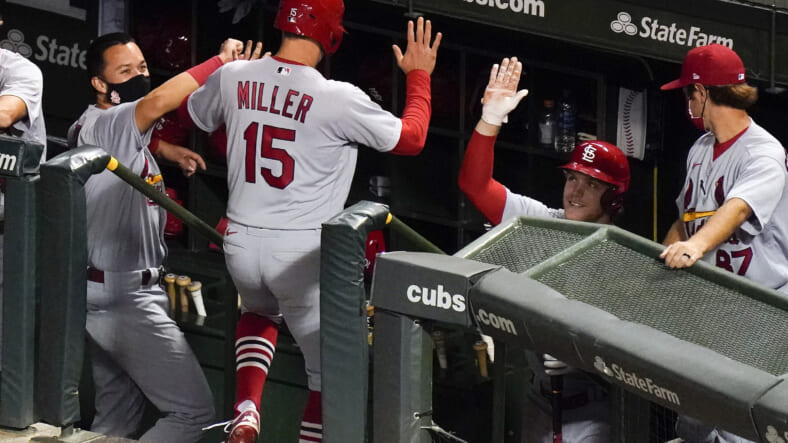 CHICAGO, ILLINOIS - AUGUST 17: Brad Miller #15 of the St. Louis Cardinals is congratulated by teammates following his home run during the fourth inning of Game Two of a doubleheader against the Chicago Cubs at Wrigley Field on August 17, 2020 in Chicago, Illinois. (Photo by Nuccio DiNuzzo/Getty Images)

The New York Yankees have been stuck in neutral while waiting to see if they can re-sign DJ LeMahieu. According to reports, the sides are far apart in the negotiations. Meanwhile, LeMahieu is tired of waiting for the Yankees to meet his demands; he and the Wasserman Group, his agent, are re-engaging with the Toronto Blue Jays, the Los Angeles Dodgers, and even the Boston Red Sox. The Yankees would want to see the last thing for him to go to a team in their same division. However, the Yankees don’t seem to be budging from a contract more to their liking.

If the Yankees find that they can’t sign the batting champ for another tour on the Yankees, the Yankees will have to scramble to fill another hole in the team. The Yankees could solve the problem quickly by reuniting with their old friend Didi Gregorius. Gregorius knows the territory and is one of the best shortstops in the game. Gregorius was unhappy with the Yankees when he was not offered a contract after the 2019 season. He ended up going with Joe Girardi’s Phillies, where he had a bounce-back year.Â  He hit .284 with ten homers; in a normal year, that’s the equivalent of 27 home runs.

However, adding Gregorius would be the most expensive of available options. With the Phillies saying they don’t have the money to re-sign Didi, they are still interested in keeping him. For the Yankees, they would most likely have to offer him at least a short-term multi-year contract. It would probably cost the Yankees at least $20 million on a two-year deal. However, the Yankees would get a no questioned asked shortstop, move Gleyber Torres to second base, and get an active lefty bat in the Yankee’s right heavy lineup.

If the New York Yankees cant signed DJ LeMahieu and chose not to reunite with Didi Gregorius, there are other options. One is to consider is Brad Miller, who the St. Louis Cardinal did not offer a contract extension. The Veteran Miller is 31 and is a utility infielder. His prime spots are at short and second base, but he also is a very satisfactory player at first and at the hot corner. He is not the greatest hitter, but he does hit for contact and is a lefty bat for the lineup. Last season he hit .232 with seven home runs. Miller seems to get on base more than his stats would suggest he had a .807 OPS last season.

If his hitting is lacking and being fair, he hit .263 in 2019; his defense is not; he is one of the best defenders of infielders. He had a 1.000 fielding percentage last season both at short and at second base. He also had the same fielding percentage at short during the 2019 season. With those stats, he is certainly an upgrade over Torres at short. The big plus for the cost-conscious Yankees is that they could probably get him on a short term contract for $2 million annually.

Miller has played with the Seattle Mariners, Tampa Bay Rays, Milwaukee Brewers, and Cleveland. In the spring of 2019, the Yankees showed an interest in Miller when they signed him to a minor league contract, but he ended up with the Indians