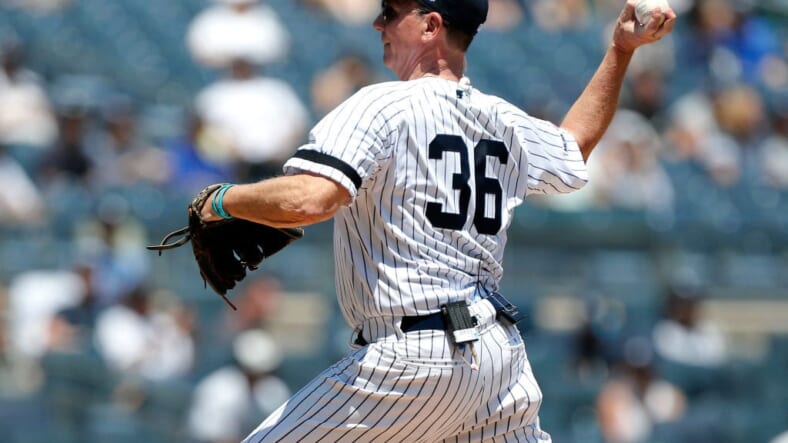 NEW YORK, NEW YORK – JUNE 23: Former New York Yankee David Cone participates during the teams Old Timer’s Day prior to a game between the Yankees and the Houston Astros at Yankee Stadium on June 23, 2019 in New York City. (Photo by Jim McIsaac/Getty Images)

The New York Yankees and the YES Network are fortunate to have “Mr. Perfect,” David Cone on their staff commenting on the games, pitchers, and hitters. Cone had one of the Yankees’ perfect games on July 18, 1999. He is one of the most knowledgeable pitching authorities in all of baseball.

Cone has on his resume a 17-year pitching career, with an ERA of 3.46. He spent the best years of his career with the New York Yankees. He has a lifetime WAR of 62.4. He had two 20 game wins and was a five-time Cy Young Award nominee, winning it in 1994. Over the weekend, he spoke by phone to NJ.com’s Brendon Kuty about spring training and his thoughts on the Yankee pitchers.

Kluber became a Yankee just after the Yankees re-signed batting champ DJ LeMahieu. The Yankees gave him an $11 million on a year deal, taking on the risk of a pitcher that had a 2019 season that was cut short after he got hit with a comebacker. In 2020 he pitched only one inning after suffering a shoulder injury. But so far in spring training, he looks Cy Young sharp.

â€œHeâ€™s not babying it,â€ Cone said. â€œHeâ€™s not being tentative. Itâ€™s like heâ€™s got confidence in his stuff because itâ€™s snapping again. â€œThat slider â€¦ when he was at the top of the game, he had one of the worldâ€™s best sliders. It had itâ€™s own name, â€˜The Kluber Slider.â€™ People wanted that pitch and it looked like it was snapping. It looked good (Wednesday).â€

David Cone admires Taillon, sighting his background and what he has been through. Taillon is another pitcher that hasn’t pitched in the past two years and is returning from his second Tommy John surgery. During the offseason, Taillon made several changes to his delivery to protect his arm, and so far, those changes are paying off. Cone had this to say:

“I canâ€™t help but admire somebody like him, the way he handles himself. But the stuff, too, is exciting. His curveball is for real. Itâ€™s got real depth to it. Heâ€™s got that swing-and-miss stuff that you love to see from a starting pitcher.”

Domingo German in 2019 went 18-4 before he was suspended for a domestic violence issue. He missed the last games of the regular season and the entire postseason. While serving out his suspension, he didn’t pitch at all in the short 2020 season. A remorseful German has apparently convinced the Yankees that he is a changed man and ready to get back into the game.

In his outing last week, German was near perfect, pitching two innings while allowing only 1 single and no walks. He struck out 4 hitters; that’s 18 per nine innings. Cone gave his thoughts on who would be the fifth starter.

“In terms of the overall picture, whoâ€™s more established, who has options left, the status of their development, how far along are they â€¦ it almost seems as if that gives (Domingo) German the leg up right now, just in terms of those things, aside from all the off-the-field stuff, obviously.”

Cone spoke about the Yankee pitching depth that allowed them to take chances on Kluber and Taillon’s likes, saying if the Yankees have problems, they have many capable arms to rely on. He spoke specifically on Luis Medina, a fireballer coming up through the ranks.

Just from what Iâ€™ve seen on video, Luis Medina. To see him do what he did in winter ball and the type of stuff he had, how polished he already looks, itâ€™s easy to get excited about somebody like him. Not just his fastball, but his feel for his secondary pitches.

The New York Yankees will play the Detroit Tigers today at Lakeland, Florida, northeast of the Yankee’s home. Deivi Garcia will get his second start of spring training. Garcia is the one pitcher that has really struggled. In his first game, he gave up two runs in as many innings. He will face the Tiger’s Spencer Turnbull in the 1 pm game that will not be televised. Garcia is hoping for a quick bounceback.