New York Yankees: Coming alive in the eighth the Yankees sweep the Rangers 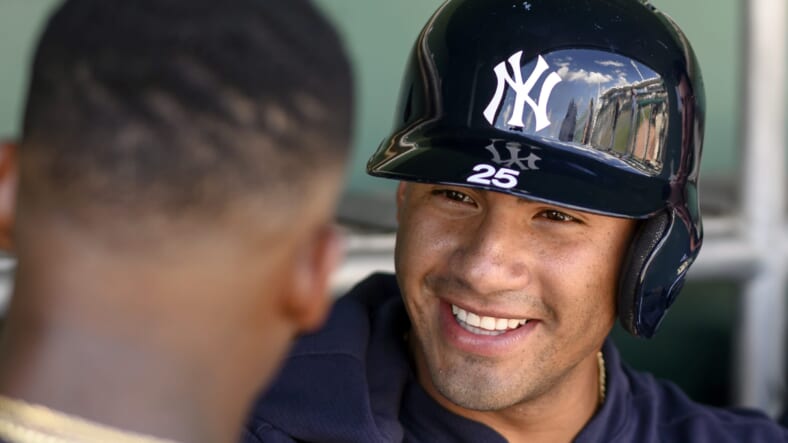 Tonight after taking the series from the Texas Rangers, the New York Yankees looked for the sweep of the Texas team as they continually looked for a place in the wild card series. With the win last night and Toronto’s loss, they are tied for that second spot. So, the Yankees sent Corey Kluber to the mound with great urgency to face the Ranger’s Taylor Hearn looking for their third must-win in a row. The Yankees won the game 7-3.

Yonny Hernandez opened the game facing Kluber and struck out looking. Isiah Kiner-Falefa singled to no man’s land in left-center. Falefa stole second. Andy Ibanez struck out looking. Nat Lowe struck out, tapping into catcher Higashioka’s glove. At the bottom, DJ LeMahieu led off for the Yankees and flew out to left. Luke Voit ground out to third. Aaron Judge struck out in order. No score.

The second inning was led off by Adolis Garcia, who reached on a hit to short. Willie Calhoun singled with Garcia scoring on the play. DJ Peters reached on a fielder’s choice. Brock Holt reached on another fielder’s choice. Jose Trevino singled. Hernandez ground out to first, leaving two on base. At the bottom Giancarlo Stanton singled off the right-field wall; he hit it so hard he had to stay at first. Joey Gallo walked. Gleyber Torres, with two on and no outs, ground out to third with the runners advancing. Gio Urshela had a broken-bat out to left-center. Kyle Higashioka flew out to the right-field wall. New York Rangers 1 Yankees 0.

.Isiah Kiner-Falefa led off the third inning by flying out. Ibanez flew out. Lowe flew out to Gardner, going 1-2-3 for Kluber. Brett Gardner led off the bottom by singling to left. LeMahieu flew out to right. Voit ground into a double play to end the inning. Rangers 1 Yankees 0.

In the fifth inning, Hernandez led off by doubling to center. Kiner-Falefa singled, with Hernandez scoring from second. Ibanez lined out to a diving Urshela. Lowe coming up knocked Kluber out of the game. Lowe faced new Yankee pitcher Wandy Peralta and reached on a fielder’s choice, Falefa reached third on a bad throw. Garcia popped out, and Calhoun ground out to first to end the half. At the bottom, Torres walked. Urshela singled. Higashioka doubled to left field, scoring Torres and Urshela. Gardner ground out. LeMahieu hit into a double play. Higashioka was called out as he tried to reach home. Texas Rangers 3 New York Yankees 2.

Peters led off the sixth inning flew out to center. Holt tapped back to Peralta for the second out. Trevino ground out. Luke Voit led off the bottom by striking out. Judge walked. Stanton walked and knocked Hearn out of the game. Gallo faced the new pitcher Dennis Santana and walked to load the bases with only one out. Torres went down on strikes. A ball got away from the catcher, and Judge scored to tie the game. Urshela went down looking but stranding two; the Yankees tied the game. New York Yankees 3 Rangers 3.

The eighth inning was lead off by Lowe facing new pitcher Chad Green and flew out to short. Garcia singled on an E6. Garcia tried to steal but was called out at second. Calhoun lined out directly to LeMahieu. At the bottom, Judge popped out. Stanton struck out swinging. Gallo doubled. Torres doubled to score Gallo and the Yankee lead in the game. Urshela singled with Torres safe at home for the Yankee two-run lead. Sanchez homered, driving in two more runs. Gardner walked. LeMahieu grounded out to third. New York Yankees 7 Rangers 3.

With last licks on the line for the Rangers, DJ Peters came to the plate in the top of the ninth against closer Aroldis Chapman and popped out to third. Culberson pinch-hitting struck out.Â  Trevino stuck out swinging.Â  The final score was the New York Yankees 7 and the Texas Rangers 3. The winning pitcher was Chad Green, and the loser was Spencer Patton.