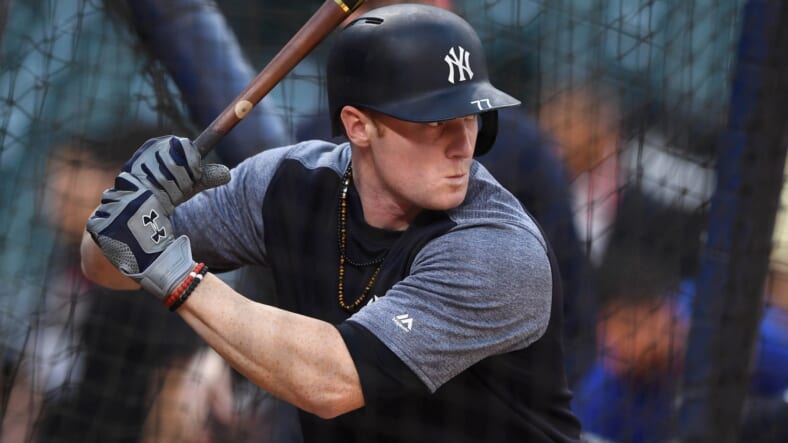 New York Yankee’s left fielder Clint Frazier had a solid two hit game, but didn’t get much support from his teammates as the Yankees fell 5-1 to the Royals.

Frazier was the only bright spot on offense

The Yankees had just four hits on the evening, and Frazier accounted for two of them. He singled in the fourth and the ninth.

The other two hits came from Aaron Judge and Luke Voit. Voit’s average isn’t climbing too fast, mainly because he is consistently getting one hit a game, no more and no less. His average currently sits at .219. He’s reached safely in every game this season, with an OBP of .342.

Gleyber Torres was responsible for driving in the Yankee’s lone run on a sacrifice fly in the first.

Mike Ford made his MLB debut on Thursday, batting seventh as the DH. He went 0-for-3 with two strikeouts, and a fly-out in his first at-bat.

Another good start for German

Domingo German continued to impress on Thursday over six strong. He allowed three runs, and struck out nine. He’s beginning to trust his stuff more, and that’s why he’s been so much better than last year. He gave up two home runs, which is slightly concerning, but still got more ground-outs (five) than fly-outs (four).

Jonathan Holder came in to relieve German, and got hammered. He gave up two runs and only got one out before Britton had to clean-up his mess.

He gave up two hits, but Chad Green managed to (barely) work a scoreless inning, ones that haven’t been to frequent for him so far this year.

Joe Harvey came in the ninth, and gave up the first run of his MLB career. It wouldn’t matter, as the Yankee’s put up another zero in the bottom of the inning to end the game.

Game two of the series begins on Friday at 7:05PM on YES and Fox Sports Go. CC Sabathia gets the ball for the Yankees against Jake Junis of the Royals. Junis was the pitcher that hit Judge last year, putting him on the then called disabled list.