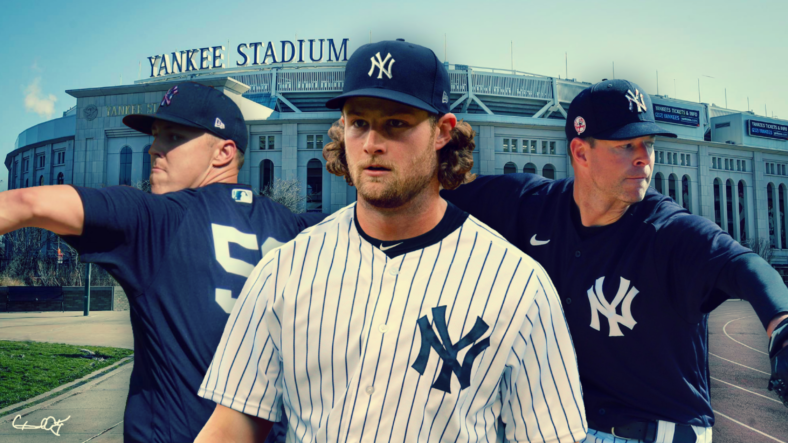 By now, all New York Yankee fans know that the Yankees have completely revamped the starting rotation. For those more casual fans who don’t know, the Yankees let the bulk of the pitchers walk into free agency and made no known offers to retain any of them at the end of the season. Masahiro Tanaka is now pitching in Korea, James Paxton is back with the Seattle Mariners, and J.A. Happ is with the Minnesota Twins.

During the 2019/20 offseason, the New York Yankees went to California and lured arguably the best pitcher in baseball, Gerrit Cole, to become a Yankee. This offseason, they contracted two-time Cy Young Award winner Corey Kluber and traded with the Indians for Jameson Taillon, another top of the heap starter. (Taillon is pronounced TIEown)

Just like the “core 4” was really the core 5 with Bernie Williams, the “Big Three” may also be a misnomer because, in addition to the three, the Yankees also have holdovers Jordan Montgomery, Domingo German, and eventually Luis Severino. Before we get too cheery about this rotation, there is a bugaboo involved, that being Kluber and Taillon’s health. They both have had health issues in the past two years. Kluber was hit by a pitch in 2019 and only pitched one inning last year, suffering a should issue. Taillon is coming back from his second Tommy John surgery.

So far, the health issues seem to be in the past, and both of these guys seem entirely healthy in spring training; hopefully, the fact that they haven’t pitched in the past two years won’t be an issue, and they will return to their previous form. If that is the case, the Yankees could have one of the most feared starting rotations in baseball.

With the season’s Opening Day just a few days away, two of the best performing pitchers are not in the “Big Three.” German leads the entire pack, pitching 9 innings without allowing a run while striking out 13 opponents. Montgomery has the second-lowest ERA, a tiny 0.90. As of today, the Yankee pitching rotation has the 4th lowest ERA in all of baseball.

Domingo German, who did not pitch at all last year due to suspension, has by far been the New York Yankees’ best pitcher in spring training. He looks good, looks confident, and is healthy. In three starts and 9 innings pitched, he has a zero ERA. He has allowed 5 hits while being a strikeout machine, striking out 13. He has had excellent control walking only one across the span. These numbers are also too good to be believed and probably won’t continue, but if his spring performance is any indication, he could very well be the season’s best pitcher. In 2019 he was 18-4 and could have had a 20 game season had it not be cut short.

At one point, many in the know thought that Jordan Montgomery could be the next great Yankees pitcher, which has never come to fruition, mostly because of his Tommy John surgery which greatly held him back. Now two years removed from the surgery, “Monty” is this spring’s second-best performing pitcher.Â  His ERA is 0.90 in three games for a total of 10 innings. He has allowed only 4 hits. He needs to tune up his command; he has allowed walks to 3 batters. This could be Montgomery’s break-out year.

Taillon holds down the number 3 spot for spring training performance and a solid one at that. Since his second Tommy John surgery, Taillon has made adjustments to his delivery to ease up arm strain. So far during the spring, he has looked great. Very strong and very confident. His ERA is a tiny 1.08. He has pitched 8.1 innings allowing 9 hits, but at the same time striking out more batters than any Yankee pitcher (14) other than Gerrit Cole. Taillon will probably be the number three starter for the Yankees. How he ends up is anyone’s guess. The trio of German, Montgomery, and Taillon has not allowed a home run this spring.

Kluber will be the number two starter by most reports. He also has the second worse ERA of any of the starters, sitting at 1.86. Please make no mistake, we use the word worse very loosely, and an ERA of 1.86 at the end of the season would make what the Yankees paid for him worth at least twice that amount. Over 9.2 innings, he has allowed 9 hits, 2 earned runs while striking out 9. What is most important with Kluber is that he feels great and is healthy. If he stays that way, he could have a Cy Young season.

Gerrit Cole could be best described as a work in progress. Cole is known for trying out new things and refining others in spring training. He has had his last start of the spring and is easily the New York Yankee’s worst-performing starter. But that being said, if he continued at his present rate, the Yankees would be tickled with a 2.45 ERA over the season.

His biggest problem in the spring has been giving up the long ball (3) only second to Deivi Garcia demoted to the minors. The big difference between the two is that Cole has the most strikeouts of any starter (24). However, it concerns that those home runs dog him. Surely something he will look to fix in the regular season. With Cole’s 3.19 career ERA, the Yankees are certainly not worried about how Cole will perform in the regular season.

Although this article is about the Yankees starters, it would not be fair not to mention the big three Yankee reliever standouts. Jonathan Loaisiga has been a huge bright spot for the Yankees during the spring. He has pitched in six games with the most innings of any reliever and has an ERA of 1.36. He has allowed only 6 hits across 13.1 innings while striking out 10 and walking only 2. If any Yankee starter becomes injured, the Yankees will surely consider Loaisiga as a replacement.

Lucas Luetge was picked up over the offseason. He has been terrific for the Yankees. He has struck out more hitters than any reliever (18). His ERA is 1.74, and if it weren’t for one game, he would not have any ERA, but in one outing, he gave up two home runs. Nick Nelson is another standout this spring. Nelson has an ERA of 1.04, has not given up a home run, and has struck out 9 batters.

The Yankees going into the regular season have never looked so good since they acquired CC Sabathia. That was 2009 the last time the Yankees won a World Series. One huge thing missing from this article is that no starter or reliever mentioned has an ERA over 2.45. This is enormous for the New York Yankees; if they can maintain this and stay healthy, the Yankees have a great chance to be on their way to a 28th World Championship.