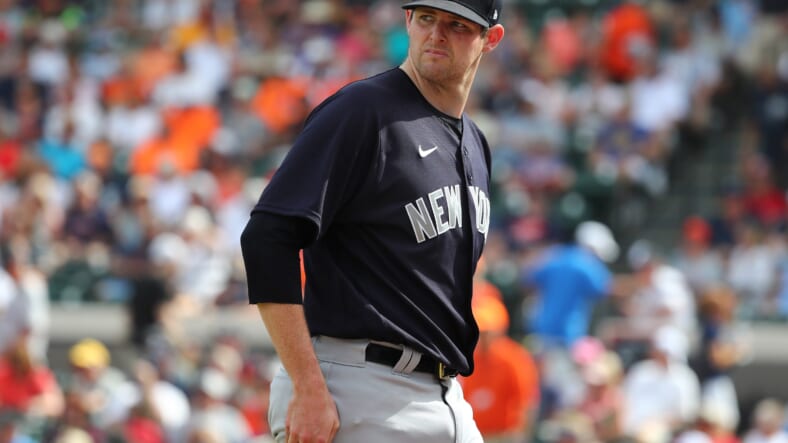 Last night with dark clouds looming in the distance, the New York Yankees entered Oriole’s Park at Camden Yards with the hopes of sweeping the Baltimore Orioles for the first time this year, but the dark clouds should have been recognized that they were a precursor to another failed attempt. The Yankees lost 3-2. Wandy Peralta was the losing pitcher giving up the winning run in the 10th inning.

Montgomery, the no support kid

For the New York Yankees, this has been a year when the Yankee’s lineup has failed to live up to its potential, not giving several Yankees starters the offense needed to win games. Jordan Montgomery has been one of those pitchers. Unfortunately, he is not ace Gerrit Cole, the only pitcher that has equaled Montgomery’s lack of run support. Both at 3.81 runs per game.

Montgomery is an outstanding pitcher, but he is not Gerrit Cole; the lack of run support being equal hurt him more than Cole. Last night was no different. Compare that 3.81 to Chis Sale of the Boston Red Sox with 9.4 runs of support or San Diego’s Chris Paddack’s 6.64 runs of support. Paddack is not a great pitcher, but even a lousy pitcher will win a lot of games with that kind of support. Unfortunately, last night into the sixth inning Montgomery got zero run support. At least Montgomery for the most part has taken it well, although that understanding seems to have cracks in it lately.

Can Yankees use weather as a scapegoat?

With the Yankee’s fans’ desire to find some reason the Yankees can’t sweep the Orioles, they could use the weather as a scapegoat for the Yankee’s poor performance. After all, by his own admission, Joey Gallo, with the bases loaded, knew he had hit a Grand Slam only to find out that incoming wind caused his longball to drop short of the wall ending in an out. Gallo is a great home run hitter; with a 155 to his name, he knows off the bat when or if it’s a home run.

Or we could look to the normally great Clay Holmes, who was wild as hell in the eighth allowing the game to be tied up in the ninth in the pouring rain. But the reality is that there are no scapegoats. The Yankees have been a very inconsistent team all year, and last night was no different. No timely hitting and only one home run doesn’t lead to many wins. By the way, in the second inning, Gallo did hit his 35 home run of the season. Gallo has hit 4 home runs in his last seven games.

What’s with the Yankees and Orioles?

The Baltimore Orioles are and have been one of the worst teams in baseball for the past few years. The Orioles will lose well over 100 games this season. But this season, the New York Yankees have not been able to dominate them. This lowly Baltimore team has won more games over the Yankees than any other team in their division.

Compared to the division-leading Tampa Bay Rays, they have had their way against the Orioles, winning 18 of 19 games against them. The Red Sox, in their most recent meeting, outscored the Orioles 30-5. Yet the Yankees can’t get the job done. I will leave it up to someone else to figure out why.

Yankees slip back out of the wild card

When everything looked totally gloomy for the Yankee’s hopes of reaching the postseason, the Yankees went on a tear, winning 13 games in a row and renewing their hopes for a 28th World Championship. But since then, things haven’t been as rosy, losing more games than those they won. The Yankees finally got a wild card berth and eventually owned the game one home-field advantage. But surges from the Toronto Blue Jays and the Red Sox have made it challenging for the Yankees. With the loss last night and only 15 games remaining in the season, the Yankees have slipped back out of a wild card berth, looking in at the Toronto Blue Jays and the Red Sox that hold the number one and two spots, respectively.