Looking at Yankees’ most underrated relief arm in the playoffs 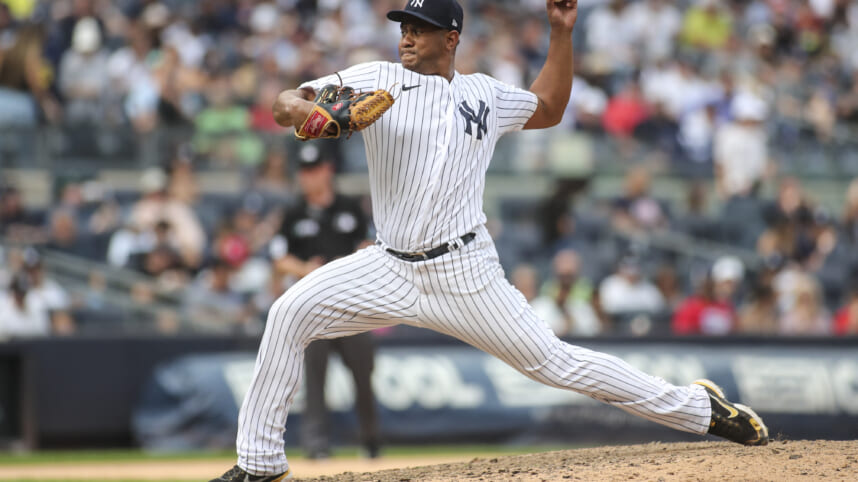 The New York Yankees have plenty of big names littering their bullpen, notably Aroldis Chapman, Zack Britton, and even newly acquired Scott Effross. However, there is one relief pitcher that hasn’t gotten enough credit this season for his exceptional performance, and he’s gearing up to make a significant impact in the playoffs.

The referenced bullpen arm is lefty Wandy Peralta, who has put together a fantastic year for the Yankees despite some inconsistencies among his teammates. There is a good argument to make that both Chapman and Britton should be left off the playoff roster, considering neither have contributed consistently this year.

Britton has made just one appearance coming off Tommy John surgery and Chapman has been polarizing, dealing with Achilles tendinitis and, most recently, a leg infection stemming from a tattoo.

However, Peralta has been a consistent threat, having recently landed on the injured list due to back issues. This feels more like a phantom injury list placement, giving Peralta plenty of rest before the playoffs. Manager Aaron Boone stated last week that Wandy would return from the season-finale series against the Rangers.

How has Wandy Peralta looked for the Yankees this year?

Peralta utilizes a change-up, sinker, slider, and occasional 4-seam fastball. He has one of the best change-ups on the team, featuring a .198 batting average against with a 38.1% whiff rate and 26% put-away rate over 101 at-bats.

If the Yankees leave Chapman and Britton off the playoff roster, Peralta will be their primary lefty arm in the later innings. Considering he hadn’t given up a run in the month of September before allowing two against Milwaukee, in which he was immediately placed on the injured list, it is safe to say he’s a reliable option that will be thrown into high-level situations routinely in October.