How Yankees star closer Clay Holmes has revitalized his game 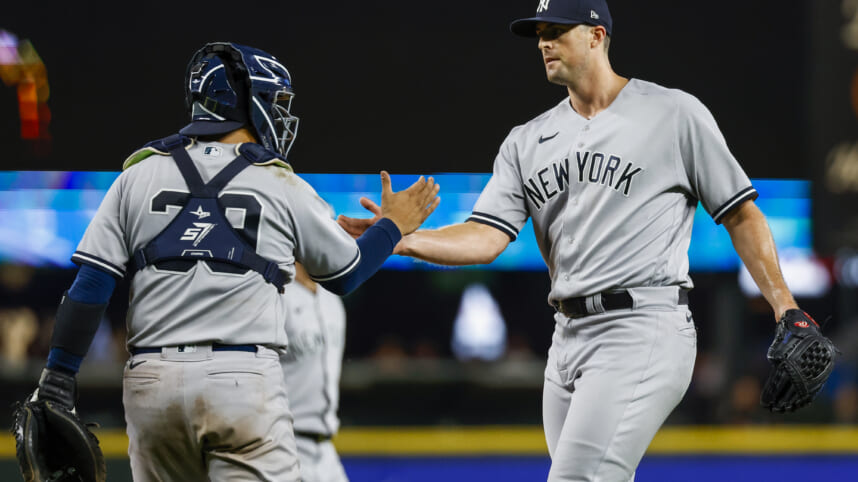 In mid-August, New York Yankees closer Clay Holmes looked like a pitcher who lost his momentum, direction, and his reputation as infallible. As he blew a 2-1 lead in the 9th, Clay Holmes walked off the mound and promptly hit the IL with “back spasms.”

This IL stint was most likely to get him to reset, a phantom IL stint of sorts, and as he’s slowly returned back into pitching high-leverage innings for the Yankees, there’s been a tweak to Clay Holmes’ game. The Yankees were in desperate need of a designated number one option in that bullpen, and with Clay Holmes unveiling a dual-slider repertoire in tandem with his sinker, it seems that top dog is back.

Baseball’s Reliance on Fastballs Is Diminishing

For the first time since pitch usage has been tracked (2002), fastball usage is no longer above 50.0%. Fastballs are still the most used pitch in the sport, but they aren’t used as the industry standard for a primary pitch anymore.

Sliders have begun to skyrocket in popularity, going from just 16.9% usage in 2018 to 21.8% usage in 2022, the second most frequently used pitch across the league. Straight-up velocity just does not have the “dominant” advantage it once held, as high 90s fastballs have become more common in the league, with the average fastball sitting at 93.6 MPH when as recently as 2003, the average fastball sat under 90 MPH (89.4).

Pitching has changed exponentially in the 21st Century, and our understanding of what works and does not has shifted as well, and thus the idea of “establishing the fastball” just isn’t as prevalent when you can dominate a lineup with off-speed and breaking balls. Clay Holmes dominates with his fastball, as his sinker is one of the best in the sport, but what has caused him to fall off the rails is that without his sinker command, he struggles to put batters away and generate strikeouts instead of balls in play, when strikeouts are the most effective form of out.

Just like with fastballs, though, sliders have generated their own variants.

Clay Holmes showed off two different sliders in his save the Twins, a sweeping slider and a gyro slider. A sweeping slider is a pitch with far less vertical drop, more active spin, and significantly more horizontal movement. The sweeping slider sits at 81.5 MPH, so while it’s slower, the movement on the pitch is far more drastic and alien-like. A prime example of this pitch is this sweeping slider that Clay Holmes threw to former-Yankee Gary Sanchez that got an ugly swing out of the zone.

A gyro slider is a slider that generates minimal “sweep” (glove-side horizontal movement) but has vertical drop and more velocity than its whirly variant, sitting at 85.4 MPH. An example of this slider is the one Clay Holmes threw, as shown here:

This is in the exact same at-bat, and that’s what I find most intriguing; Clay Holmes threw two completely different breaking balls with drastically different horizontal movement and a notable gap in velocity, and both are labeled as “sliders.” We know they’re different pitches, thrown differently, with different axes of spin, and with varying efficiencies of spin, and yet they’re labeled as the same pitch. Clay Holmes freezes Gary Sanchez here, who anticipates a lot more sweep when he picks up the slider out of the hand, but as he’s ready to take a pitch that should be 10 inches off the plate and in the left-handed batters box, it has minimal horizontal break. It stays in the strike zone, Gary goes from a 1-1 count to an 0-2 count.

In 1-1 counts, batters have a 90 wRC+ and 27.1% K%, while an 0-2 count has a 23 wRC+ with a 44.8% K%. It’s a dramatic gap as hitters go from just below league average to a pitcher at the plate, and that sleight of hand with his slider is the nail in the coffin for Sanchez, who swings over an incoming sweeper.

Clay Holmes doesn’t try a single sinker, and everyone knew a slider was coming in that 0-2 count, and yet Gary Sanchez is overpowered by one that misses up (Trevino pounds the ground with the glove, indicated he wanted it in the dirt), and that’s because Sanchez only knows a slider is coming; not what type of slider is coming. Just like knowing “fastball” does not mean you know what the movement is, as it could be a cutter, four-seamer, or sinker.

Instead of relying solely on his sweeper, Holmes has brought a gyro back into the fold, and it’s an added layer of deception he could use to keep hitters off balance and generate strikeouts.

Getting Strikeouts Leads To Success

While getting groundballs is incredible, but Holmes is making a conscious effort to generate more strikeouts and whiffs. There’s a lot of value in generating strikeouts, as unlike with any batted ball, they have an xBA of .000. There’s no defense needed for a strikeout beyond the occasional dropped third strike, thus the highest out probability among all outcomes for a pitcher. His slider simply generates more whiffs and converts more strikeouts, and while there are definitely situations that you want to go sinker so you can force a double play, there is still an emphasis on getting whiffs in this league.

Clay Holmes has an added wrinkle of deception with two sliders instead of one, and he’s going to play a huge role down the stretch for this Yankee team.