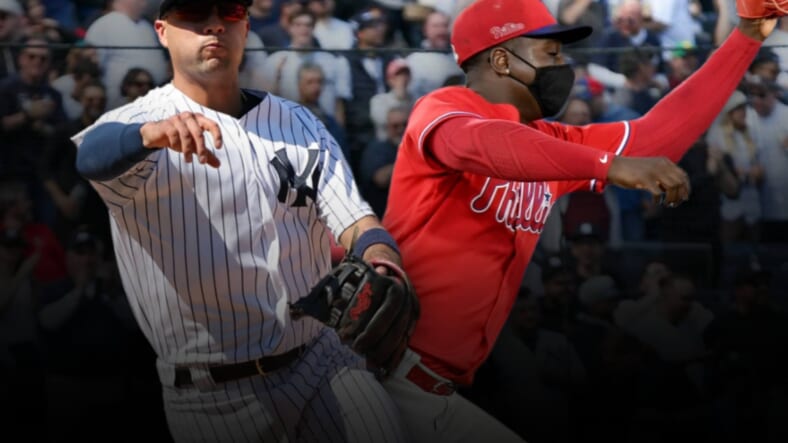 When the New York Yankees acquired Isiah Kiner-Falefa from the Minnesota Twins in a multiplayer trade, general manager Brian Cashman was hoping he could lock down the shortstop position for the next year or two. IKF has struggled defensively this season after posting a .972 fielding percentage over 1,360 innings with Texas at shortstop in 2021. This year, he’s earned a .965 percentage with eight errors over 594 innings.

Overall, Kiner-Falefa hasn’t been as good as Cashman hoped, especially on the offensive side. The 27-year-old infielder is hitting .260 with a 31.2% on-base rate. He’s failed to hit a home run this season, but more importantly, his contact hitting hasn’t translated to getting on base.

The only saving grace for IKF is his splits with runners in scoring position. With runners on base, IKF is hitting .313 with a 34.5% on base rate. He’s one of the better hitters on the team in that regard, but he’s still been lackluster for the most part.

That could suggest that Cashman looks to the trade deadline to potentially fill the shortstop position with another player. The Yankees could consider a familiar face, Didi Gregorius from the Philadelphia Phillies.

The Yankees might be able to snag Didi for next to nothing:

Considering Philadelphia ranks third in the NL East behind the New York Mets and Atlanta Braves, they have a tall task ahead of them. They’re currently 7.5 games back from the Mets and 2.5 games out of the Wild Card. They could look to shake things up at the deadline, and Gregorius could be a movable piece if the Yankees are looking for a player who has postseason experience and would immediately fit in.

This season, Gregorius is hitting .263 with a 32.5% on base rate. He hasn’t hit a home run, but he still features a 26.5% hard-hit rate. He has decreased his launch angle significantly this year, which has unfortunately resulted in fewer fly balls.

However, Didi still has the power to take advantage of the short right porch in Yankee Stadium. In addition, he’s having a great defensive season, recording a .986 fielding percentage over 318 innings this season. He’s turned 18 double plays and has just two errors. He would be a massive upgrade on the defensive side compared to Kiner-Falefa, who could feature as a utility piece or split reps at third with Josh Donaldson.

Acquiring Gregorius would likely be simple if Philadelphia is willing to part with the shortstop. He’s earning $14 million this season, so the Yankees would have to pick up about half his salary. They could find a way for Philadelphia to pay most of his remaining balance with an extra low-level prospect, given the Yankees don’t have much money to spend after Aaron Judge’s arbitration case.

Alternatively, they can go with a far simpler route, pulling up Oswald Peraza from Triple-A, who was dominant in the month of June.