Are the New York Yankees the favorites to sign Gerrit Cole this offseason? 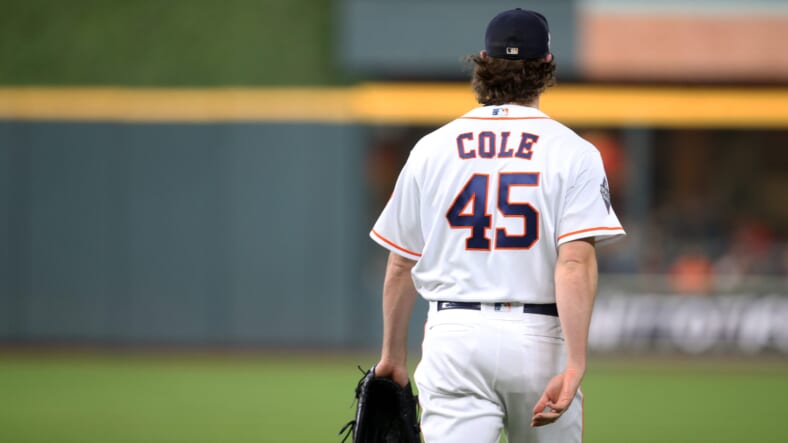 Oct 22, 2019; Houston, TX, USA; Houston Astros starting pitcher Gerrit Cole (45) walks to the bullpen to warm up before game one of the 2019 World Series against the Washington Nationals at Minute Maid Park. Mandatory Credit: Thomas B. Shea-USA TODAY Sports

Gaining the best pitching baseball would not only be a massive boost to the New York Yankees starting pitching rotation, but it would provide them with a player to lean on when the going gets tough. This season, Bombers were forced to guess with the pitching at times, unsure if their starters would rise to the occasion or falter in the face of adversity.

James Paxton was one of the risers, as he pitched well in the postseason and proved his worth for 2020. J.A. Happ faltered, and Luis Severino was decent in limited action after missing a majority of the regular season. However, they have an opportunity to add an arm that would revolutionize their team and make reaching the World Series that much easier.

Houston Astros pitcher Gerrit Cole is the featured pitcher, and the Yankees will undoubtedly make a bid after speaking with mega-agent, Scott Boras. Cole will likely earn $30+ million per season, which could cause issues with the Yankees’ luxury tax threshold, especially if other players are being considered at a high price point.

Third baseman Anthony Rendon has also been linked with the Bombers, but having Miguel Andujar and Gio Urshela should satisfy their needs at the hot-corner if they have a legitimate shot with Cole.

Why the New York Yankees could lose out on Gerrit Cole:

There’s always the possibility that Cole takes his talents elsewhere, but there’s no indication that he does not favor the Yankees. He grew up a fan of the illustrious franchise but also comes from the West Coast, which could influence his decision. Alternatively, he did play for the Houston Astros in the south-east, which makes him coming up North a bit more realistic.

It could ultimately come down to money, and which team is willing to splash the cash for the best pitcher in the MLB. General manager Brian Cashman can not low-ball Cole in this process because any disrespect could send him to a different city.