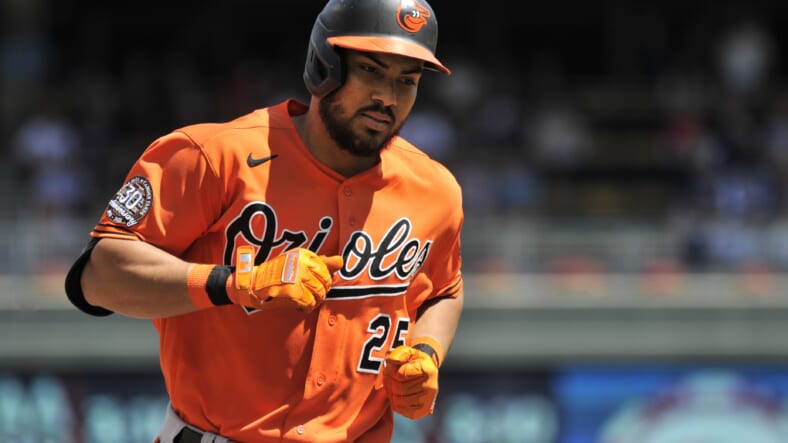 However, general manager Brian Cashman will have an opportunity at the trade deadline to address the position and replace Gallo’s inefficiency in the batter’s box.

Three outfielders the Yankees could target at the trade deadline:

One of the better options the Yankees could target is Baltimore Orioles’ right fielder, Anthony Santander.

Santander is a switch hitter at 6’2″ and 235 pounds. The 27-year-old will be a free agent in 2025, so the Bombers would have multiple years of team control.

This season, Santander is hitting .232 with a 32.2% on-base rate, 15 homers, and 40 RBIs. He holds a career-best 10.1% walk rate and a 20.2% strikeout rate. Overall, he would completely blow Gallo out of the water in terms of production. In Yankee Stadium, he might be able to hit over 30 homers on a yearly basis, but the Orioles aren’t going to give him up for cheap.

If the Yankees can snag him without giving up one of their top prospects, it might be worthwhile to inquire about his services.

Another great option is Andrew Benintendi from the Kansas City Royals. At 27 years old, Benintendi is on a one-year, $8.5 million deal. Given his contract situation, the Yankees would be able to acquire him for much less than Santander or any other top outfielder.

Benintendi is hitting .308 this season with a 37% on-base rate, three homers, and 29 RBIs. As a lefty, Benintendi has underrated power, hitting 17 homers last season for Kansas City. His 38% hard-hit rate, 4.9% barrel rate, and 89.2 mph of exit velocity are all solid numbers. Last season, he featured an 8.9% barrel rate with 15.4° of launch angle, which is why he hit more homers.

The Royals have been underwhelming this season, sitting with a 29–48 record. They are clearly going to be sellers at the deadline, so the Yankees might be able to scoop up Benintendi for cheap.

If Cashman wants to go with a more potent offensive player, Ian Happ from the Chicago Cubs would fit the bill nicely. Happ is hitting .285 with a 38% on base rate this season as a switch hitter. He’s hit eight homers with 37 RBIs, but has seen some of his hard-hit metrics decrease. His barrel percentage is a career-low 8.2%, but he is still lethal in the batter’s box.

Looking at Happ’s expected home runs by park, only four of his homers would’ve cleared the outfield wall in Yankee Stadium. With Happ walking at 12.7% and striking out at just 20%, he would be a welcomed addition to the Yankees ‘ lineup, sliding in seamlessly.

Happ primarily plays in left field, featuring in 586.1 innings this year with a .993 fielding percentage. If the Yankees acquired Happ, that would suggest an Aaron Hicks position change over to the right side. However, Ian would be very difficult to trade given the monster package Chicago would want in return.