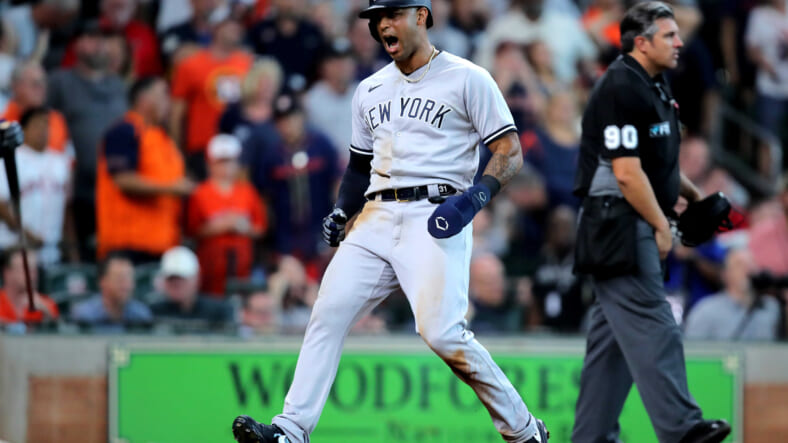 The New York Yankees are gearing up to make a big decision on reserve outfielder Aaron Hicks, who was knocked out of the playoffs prematurely due to a knee injury. Hicks collided with rookie Oswaldo Cabrera on a pop fly to shallow left field, seeing both players flying to the ground like rag dolls. Unfortunately, Hicks got the worst of it, sustaining an injury that forced tears to somberly fall down his cheeks.

Despite the ailment, Hicks projects to be 100% healthy for the 2023 season, but the 33-year-old may be with a new team by then. He signed a seven-year, $70 million deal in 2019 with a club option in 2026. However, he’s gearing up to earn a $10.5 million base salary next season, a number the Yankees would like to move on from if possible. There are only two realistic options to offload his contract if that’s the direction they want to turn.

Two ways the Yankees can offload Aaron Hicks this off-season:

1.) Package him with a prospect

The easiest option to offload Hicks would be to package him with a mid-level minor-league prospect. The veteran switch hitter isn’t a bad player by any means, just one that doesn’t fit the Yankees’ mold any longer. He recently hit .216 with a 33% on-base rate, eight homers, and 40 RBIs this past season across 130 games. He can be a serviceable player for another team, and $10.5 million isn’t an egregious number for his production.

The Bombers could easily walk away from Hicks’s contract by pairing him with the right prospect — it would have to be a very minor deal to push it through. With the money saved, the Yankees may consider retaining Andrew Benintendi since they have Harrison Bader as their everyday centerfielder next season.

2.) Pay a small portion of his salary

The other method could be to simply pay a portion of his salary for the 2023 season. Ultimately, a team might be willing to take on his contract if the Bombers help pay for a portion of it. That would stop them from having to give up any prospects. Again, the more straightforward method may be to send a player that may be stolen in the Rule 5 Draft anyway in pairing with Hicks to get rid of his entire price-tag.