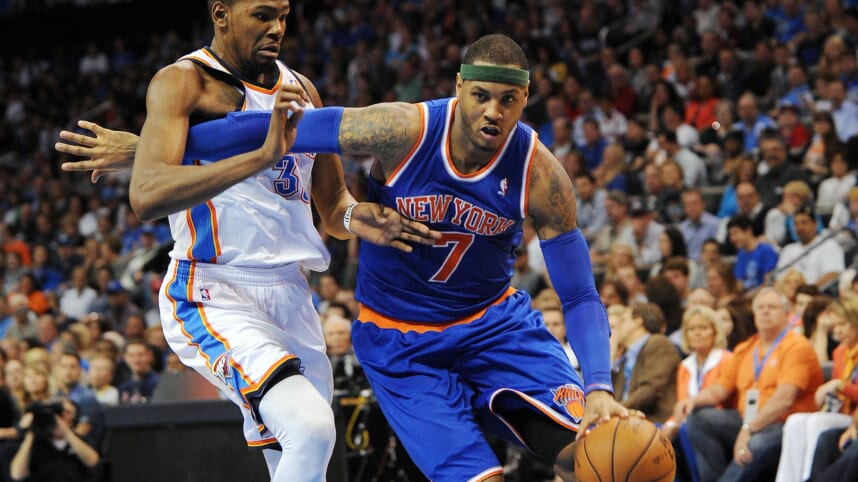 A new wrinkle on the now-concluded Kevin Durant trade demand saga surfaced over the weekend.

The New York Knicks were reportedly one of the teams who checked in with Brooklyn after Durant made trade demands.

While it would have been strange if the rival New York teams made a Durant blockbuster trade, the Knicks’ move — due diligence on their part — tells us the new regime under Leon Rose is exhausting all possible options to vault the team into contention.

“The Knicks did make calls on Kevin Durant from what I’m told, but I think both sides were cognizant they didn’t really have enough.”

Perhaps the Nets were not enamored about getting one-time All-Star Julius Randle, who regressed last season, and RJ Barrett plus picks as the return for Durant.

Durant was linked to the Knicks in the summer of 2019 before he decided to join his good friend, Kyrie Irving, in Brooklyn which led to the dismissal of former Knicks president Steve Mills.

Meanwhile, Carmelo Anthony is interested to return to New York.

“I have certainly heard that Carmelo’s got interest in a reunion. I don’t know if the Knicks have much interest there.”

Anthony still has ties to New York, especially with his former agent, Leon Rose, now at the helm.

The ongoing Knicks-Utah Jazz trade talks for three-time All-Star Donovan Mitchell could be the key.

If Obi Toppin, the young player headlining the current New York offer, gets traded to Utah, it would open up a spot for Anthony to come in and serve as Randle’s backup.

Far removed from his All-Star form during his time in New York in the early part of the last decade, Anthony is still a serviceable player off the bench, a role he had embraced in the past two seasons.

Should the Knicks pull off a Mitchell trade with only Toppin as the key young player going out, a second unit composed of Derrick Rose, Immanuel Quickley, Quentin Grimes Anthony and Isaiah Hartenstein could become one of the most potent benches in the league.

Anthony’s return could also be contingent on the Knicks’ plans on Cam Reddish. Anthony will have no room if New York’s front office wants to evaluate Reddish unless they flip the 22-year-old forward, whom they acquired using a protected first-round pick (from Charlotte).

Reddish was supposed to go to the Los Angeles Lakers, Anthony’s most recent team, in a scuttled three-team trade last February.