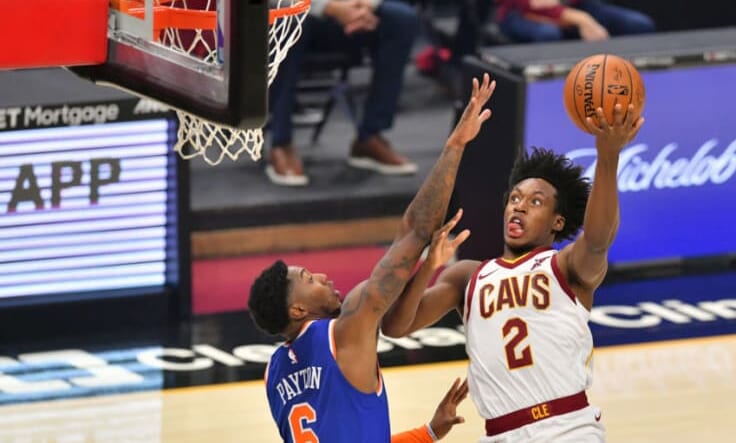 CLEVELAND, OHIO - DECEMBER 29: Collin Sexton #2 of the Cleveland Cavaliers shoots over Elfrid Payton #6 of the New York Knicks during the first quarter at Rocket Mortgage Fieldhouse on December 29, 2020 in Cleveland, Ohio. (Photo by Jason Miller/Getty Images)

Another offseason day, another point guard has been linked to the New York Knicks.

According to The Athletic report on Tuesday, the Knicks have emerged as the most aggressive trade suitor for Cleveland Cavaliers scoring guard Collin Sexton.

SB Nation’s Fear of the Sword Editor Evan Dammarell poured more fuel to the fire when he floated that a package of Obi Toppin, Kevin Knox, and one of the Knicks’ 2021 first rounders appears to be an option.

A package that would include Obi Toppin, Kevin Knox, and one of New York’s 2021 first rounders appears to be an option for Collin Sexton after reaching out to a source. https://t.co/n4czhlMTGg

If the reports are true, Brock Aller’s imprint should be all over it.

After all, Aller, the Knicks VP for Basketball and Strategic Planning, started his career in Cleveland. He served as Dan Gilbert’s personal assistant before transitioning to a front office role, where he raised his profile as one of the finest capologists around the league.

Aller was part of the Cavaliers’ front office that drafted Sexton in 2018 using the eighth pick, the key piece in the Kyrie Irving trade with the Boston Celtics.

On top of landing Sexton, the Knicks would also open up an additional $4.6 million in cap space.

Knicks will also open up additional $4.6M in cap space based on the reported package. https://t.co/rqxuVgiccu pic.twitter.com/A4Zl5ivlub

Sexton has blossomed into one of the better scoring guards in the league, increasing his scoring, assists, and efficiency throughout his first three years with the Cavaliers. But there was a red flag raised by another The Athletic report on May that painted him a “ball hog.”

“Various Cavs players still grow frustrated by the way Sexton dominates the ball, and opponents taunt them by saying during games, â€˜You know heâ€™s not going to pass you the ball,” Cavaliers’ insider Joe Vardon wrote.

The plus/minus numbers are staggering…

It may also be one of the reasons why the Cavaliers are reluctant to keep him with his rookie extension on the horizon. But Aller’s valuable direct intel on Sexton could be the key in the Knicks pushing for a deal.

But to Collins’ defense, he played with a bad Cavaliers’ roster devoid of an elite offensive threat.

If the reported package is true, it’s going to be a low-risk, high-reward move for the Knicks akin to the Derrick Rose mid-season trade.

There’s no question Sexton’s shotmaking and toughness, despite being undersized, will be a huge upgrade over Elfrid Payton. But the question is can he thrive more as a facilitator next to Randle?

Sexton will be aiming to raise his stock to get the rookie max extension he wants, which is roughly $168 million over five years.