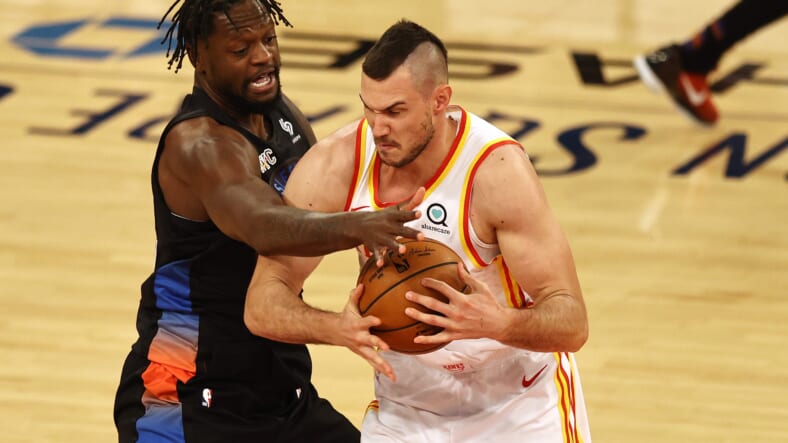 The New York Knicks could not recapture their magical Game 2 run despite Tom Thibodeau finally pulling the plug on Elfrid Payton.

Derrick Rose was in full bloom in his first start in the series but Julius Randle continued to struggle in a 105-94 loss to the Hawks Friday night at the State Farm Arena in Atlanta.

The 22-year old Young dropped 14 points and 10 assists in the first half. With Young in total control, the Hawks went on a 22-5 run to end the second quarter that broke the game wide open.

Atlanta led 58-44 at the break. Unlike in Game 2, New York did not have an answer in the second half.

Randle missed 13 of his 15 attempts that epitomized the Knicksâ€™ offensive woes. They were a woeful 35.8 percent from the floor. RJ Barrett hit rock-bottom in the series clunking seven of his nine attempts.

Randle is now shooting an ugly 13-of-54 (24.1%) in the series â€” the worst field goal percentage by any player in his first 3 playoff games in the shot clock era, per ESPN Stats & Info â€” after averaging 37.3 points on 55 percent clip in their regular-season sweep of the Hawks.

Rose was the only Knick who shot above 50 percent with the 32-year old guard scoring a season-high 30 points. He went 13-for-21 while adding six rebounds and five assists but didnâ€™t have any help.

The rest of the team was a dreadful 16-of-60 from the field.

With their engine in trouble, the Knicks were a trainwreck. The Hawks, on the other hand, were on target all night hitting 16-of-27 3s and shot 52 percent overall from the floor.

Young continued his impressive play in his playoff debut with 21 points and 14 assists. The Hawksâ€™ star is now averaging 27.7 points and 10.3 assists in the series. He is now the 5th player to average 25 points and 10 assists through his first 3 career playoff games. Young joined Kevin Johnson, Chris Paul, Stephen Curry, and Oscar Robertson in that exclusive club.

Unlike Rose, Young had help coming from everywhere.

Bogdan Bogdanovic regained his shooting touch, making half of his 12 attempts for 15 points.

Former Knick Danilo Gallinari had his breakout game in the series with 12 points, all from beyond the arc. Gallinari, Kevin Huerter, and Lou Williams combined for 31 points off the bench.

With Rose and Taj Gibson elevated to the starting lineup, the Knicksâ€™ bench struggled for 28 points. It was the first time Atlanta outscored New Yorkâ€™s bench.