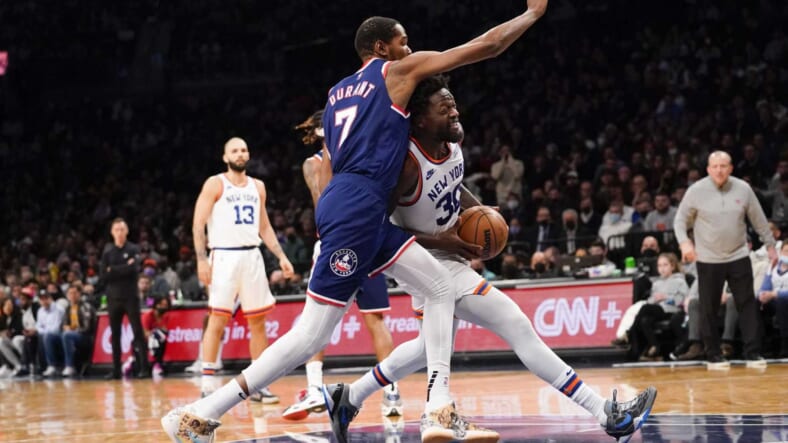 In a game, they lost by only two points, New York Knicks‘ All-NBA forward Julius Randle rued the lack of calls on his strong drives to the basket.

In his postgame presser following a Knicks’ 112-110 loss to crosstown rival Brooklyn Nets, a visibly pissed Randle vented his ire on the officiating crew of Scott Foster, Mark Lindsay, and Jason Goldenberg.

The Nets are sixth in the league in free throw attempts averaging 21.3 per game. The 11th-ranked Knicks are not that far behind, attempting 20.7 free throws per game.

Randle was hit with a technical foul for incessant complaining over a non-call in the game’s crucial moment. He felt James Harden fouled him in a tough fadeaway jumper that he missed in the previous play. With 1:37 left in the game, Durant hit a jumper and the technical free throw that gave the Nets a three-point cushion.

“I don’t know what they’re watching or what they’re seeing. As aggressive as I played, attacking the paint, I can’t be penalized for just being stronger than people. And that is an answer that I got today. “[The referees] said because certain contact doesn’t affect me like it affects other players. Because I am stronger, they miss the calls,” Randle said.

“It pisses me off even more. To be honest with you, because that is not how you officiate the game. With basketball, usually, [when] the smaller players are guarding bigger players, they get away with a lot more, but certain things are a little bit more blatant. You just slap a guy. I don’t care who it is, [but] it’s going to affect him.”

“I don’t care how the game is called,” an irate Thibodeau said. “I really don’t. You call it tight, call it loose. But it’s got to be the same.”

“I want to watch the film. But something’s not right. I’m watching what’s going on both ways. [Brooklyn’s] a good team. But I know Julius was driving the ball pretty darn hard. And I’m pissed. Thank you,” said Thibodeau as the postgame presser was cut short abruptly.

The 7-foot-1 O’Neal had his fair share of non-calls against smaller and lighter defenders during his playing days. Speaking from his experience, O’neal gave Randle unsolicited advice during the Inside the NBA postgame show on TNT.

O’Neal said Randle is correct that he is strong. He felt the same way throughout his 19-year career. But O’Neal quickly added, “[The referees] are not going to slow down the game for us.”

“What you’re going to do, big dawg, is just make [your defender] call the foul. When you got [smaller guy] on the block, punish him. When somebody is reaching, just take this elbow right here,” said O’Neal motioning to elevate his elbow to a 90-degree angle, “just lift it up three to four inches. And you just got to keep playing.”

“Remember, nobody roots for Goliath. Nobody cares. The little guys don’t care about us, big guys. But you can do it. Other big guys did it,” O’Neal said. “Stop whining. Stop complaining.”

Harden and Durant are tied for fourth with seven free throw attempts per game.