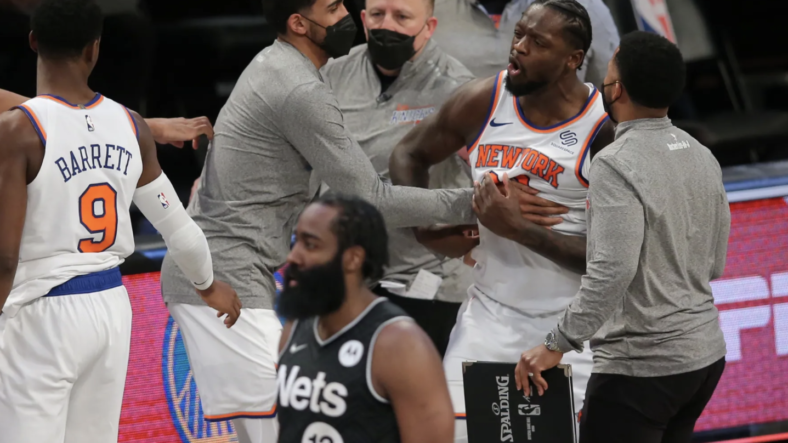 In a rivalry game that had a lot of twists and turns, James Johnson emerged as the unlikely hero.

The defensive-minded forward Johnson canned a pair of pressure-packed free throws with 2.2 seconds left that allowed the Brooklyn Nets to escape with a 112-110 win over the New York Knicks Tuesday night at Barclays Center.

Kevin Durant wisely milked the clock and found a wide-open Johnson who drove to the basket and fished a foul from Knicks center Mitchell Robinson. Evan Fournier missed a prayer at the buzzer as the Knicks’ first game without Kemba Walker in the rotation had a promising start but ended in heartbreak.

Randle charged at the official fuming after the loss.

The rest of the Knicks points guards — Alec Burks, Derrick Rose, and Immanuel Quickley — took turns in guiding the Knicks’ offense. After a hiccup in the middle quarters, the Knicks looked poised for a win when they stormed back from a 16-point third-quarter deficit.

An Obi Toppin dunk gave the Knicks a three-point lead, 98-95, midway in the fourth quarter. Then Kevin Durant carried the Nets on his back, firing 11 points down the stretch.

After the game, Durant said he wanted to take Randle one-on-one for the last shot, but Rose who came to double him, scuttled his plan. Luckily for Brooklyn, Johnson was up to the task.

Durant started the game with an ugly 2 for 9 shooting from the floor. He came back with a vengeance in the second half. Durant had 21 points on 7 of 14 shooting, mainly against Randle, who was hit with a crucial technical foul with 1:36 left.

Durant sank the bonus free throw to extend the Nets’ lead to three. After a Randle-Durant back-and-forth, Evan Fournier fired a game-tying triple with 17.7 seconds left off the Knicks’ final timeout. It turned out to be the Knicks’ last stand.

Burks led the Knicks with a new season-high 25 points, eclipsing his 23-point game in his first start in Atlanta two nights ago. Rose dropped a 16-point, 9-assist gem off the bench in his return from sickbay while Quickley added 12 points.

Harden went 9 for 10 from the line. Durant was a perfect 10 for 10. The Nets took 25 free throws, 13 more than the Knicks, which had New York coach Tom Thibodeau also upset during his postgame interview.

“My thoughts overall, we did a lot of good things. We didn’t close it out. I want to take a look at the film,” Thibodeau said. “There’s a big discrepancy in free throws. I can tell you that. Julius is driving the ball and he gets 2 free throws?”

Even with Randle taking only one-fifth of Harden and Durant’s free throw rate, he still came up with 24 points on 11 of 22 shots.

If there was another silver lining from this loss, it was Randle’s return to his All-NBA form.

Randle flirted with a triple-double as he added nine rebounds, eight assists, and two steals.

With 3:30 left in the second quarter, Randle held the ball at the right elbow. He sized up Durant.

A day earlier, Randle proclaimed Durant is the best player in the league.

“Have you even seen a 7-footer with that skill? He can do anything on the court,” said Randle after Monday’s practice. “No weakness.”

Hyped up in their matchup, Randle poked a hole in Durant’s armor.

Randle took a jab step. And in one quick motion with little hesitation, he lost Durant. Randle attacked the basket with Durant trailing. LaMarcus Aldridge came to help. It was too late.

The Knicks held a 61-60 lead at the half after blowing an eight-point lead in the opening quarter.

Randle dominated Durant in the first half. But Durant had the last laugh. And Randle went home fuming.