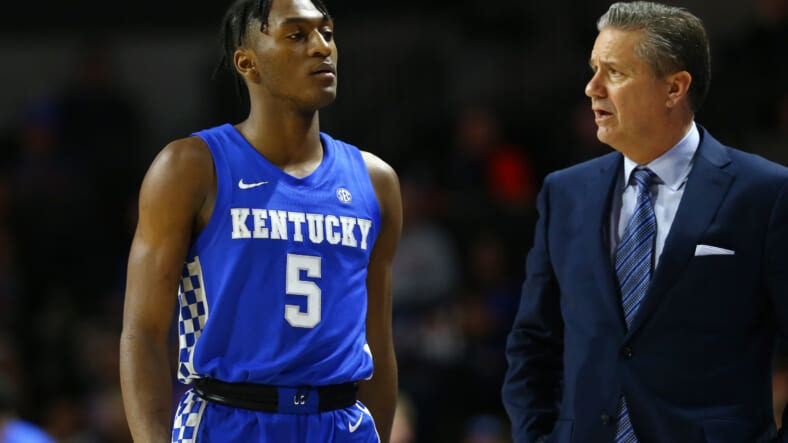 Mar 7, 2020; Gainesville, Florida, USA; Kentucky Wildcats guard Immanuel Quickley (5) walks to the bench as he gets fouled out against the Florida Gators during the second half at Exactech Arena. Mandatory Credit: Kim Klement-USA TODAY Sports

New York Knicks rookie Immanuel Quickley hasn’t changed his routine even after getting picked in the first round of this year’s NBA Draft.

There’s not a single day he missed going to the gym.

Even during the Draft Night, Quickley’s mother had to talk him out going to the gym.

That’s how dedicated Quickley is to his craft. He’s been preparing hard to prove that he’s worthy of the first-round selection when all mock drafts have slotted him late in the second round.

Before Quickley was cleared to work out in the team’s practice facility in Westchester, he frequented the gym of former Knicks trainer-turned-independent NBA Skills trainer Chris Brickley in downtown New York. Quickley has also linked up with former NBA sharpshooter Mahmoud Abdul-Rauf, who is also working out Knicks guard Dennis Smith, Jr.

For Quickley, the NBA Draft Night wasn’t the culmination of his hard work. It’s only the beginning of another mission, another challenge to overcome.

Sodipo has been with Quickley every step of the way since he was in eighth grade. And even now that Quickley has already reached his NBA dream, Sodipo never left his side. He’s accompanying Quickley to navigate his rookie season in the Big Apple.

Sodipo worked him out every day in a gym near Quickley’s residence to prepare for the Draft. While Sodipo is proud of Quickley’s progress, he’s even prouder that his ward has kept his feet on the ground even after the high selection.

Quickley has been using that as a motivation to earn his spurs in the cramped training camp that will begin Tuesday. They will only have ten days before the Knicks play their first preseason game in Detroit.

Quickley will be tested towards the end of the week when group practices will be allowed. If there’s anything that is going his way, it’s the fact that he’s been in this type of situation before. His rookie season seems like Kentucky all over again.

I see KP at the facility. It feel like Iâ€™m at Kentucky all over again ðŸ˜‚ #GoodVibes #NewYorkForever

Of course, former Kentucky assistant coach Kenny Payne will ease his transition to the team. But Quickley has to compete again and prove he’s worthy of a spot in the Knicks’ crowded backcourt that will have playoff veteran Austin Rivers and holdovers Elfrid Payton, Dennis Smith, Jr., and Frank Ntilikina.

This is one reason why Quickley has stuck with the Wildcats even after a disappointing freshman season. Rather than run from it and look for a school that will give him playing time, he embraced the challenge to compete again in a crowded Kentucky backcourt in his sophomore year.

He adjusted his game from being a point guard to playing off the ball on his way to becoming the SEC Player of the Year.

John Calipari, Quickley’s college coach, knows that his stint with the Wildcats has prepared him for this challenge.

“I think what youâ€™re going to find out is a guy that mentally is ready, is on a mission, is a gym rat, is a culture guy. Great faith, a big family that unconditionally loves him, and he knows it, and heâ€™s comfortable in his skin,” Calipari said via zoom last week. “They made a great one. It was a hell of a pick.â€

It was a hell of a ride for Quickley, too, just to get here.