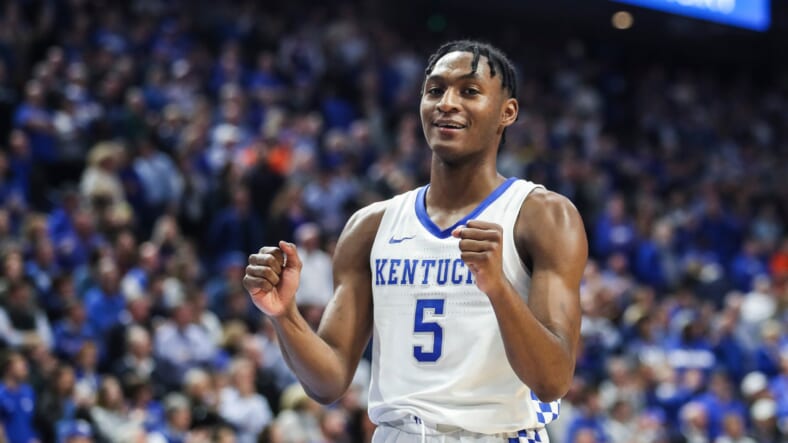 Immanuel Quickley soaks in the Wildcat win over Florida Saturday night. He finished with career-high 26 points. "He made every shot," Nick Richards said of Quickley. "When we needed a basket, we went to him. He made really tough 3s. His overall game tonight, he just played amazing."Feb. 22, 2020 Kentucky Plays Florida February 22 2020

Quickley quickly had a FaceTime call with University of Kentucky Wildcats coach John Calipari right after and the first thing he said:

Quickley’s faith had never wavered even when people began to dismiss him after an underwhelming freshman year at Kentucky. Coming in as a five-star recruit, Quickley struggled to find his footing, averaging only 5.2 points on a 37 percent clip in 18.5 minutes of play.

â€œI feel like the â€œtheyâ€ can be anybody. Youâ€™re trying to not only prove people wrong but prove yourself right. I feel like a lot of people after my freshman year at Kentucky gave up on me and said â€“ I should transfer, I should leave, Iâ€™m not going to be good enough. I just screenshotted everything I saw that said I wasnâ€™t going to be good enough,” Quickley said on MSG Network’s new morning show MSG A.M.

“And I took it to my workouts and made a list of goals and things like that. Thatâ€™s the stuff that Iâ€™ll take with me even to the next level as far as just trying to prove other people wrong, trying to prove myself right, and to just continue to keep working hard.â€

Quickley, a devout Christian, showed his faith is bigger than the challenges he faced.

He trusted the process. He had so much faith in Calipari.

Quickley became a Calipari fan during their stint at Team USA that settled for the bronze medal in the 2017 FIBA U19 World Cup.

Canada, led by his future Knicks teammate RJ Barrett’s 40 points, ousted them in the semifinals, 99-85. Quickley averaged 6.7 points and had a total of 17 assists in seven games to help Team USA salvage a bronze medal finish.

Little did he know that Calipari was also a fan of Quickley, the third-ranked point guard of the 2018 class.

Calipari made him a priority during the recruiting process.

So when Quickley was struggling at Kentucky, Calipari wasn’t quick to give up on him.

Calipari didn’t dive into Quickley’s struggle. What he saw was Quickley’s drive.

â€œHeâ€™s right up there with the hardest workers spending the most time in the gym, most committed players that Iâ€™ve ever had,â€ Calipari told Empire Sports Media via Zoom call.

â€œLast year, we went to three guards. I wasnâ€™t doing that early in the year, but as the year went on, I just said, â€˜Immanuel Quickley, he needs to be starting.â€™ That means somebody else couldnâ€™t start. [Quickley] ended up being Player of the Year in our league, but he trusted me to figure it out.â€

When Calipari gave him his shot to start, Quickley quickly seized the opportunity.

Quickley went on a tear, punching in double-digit scoring in 20 consecutive games â€” the longest streak by a Wildcat since Malik Monk (30) in 2016-17. His marksmanship was on full display, hitting at least one three-pointer in his last 11 games, including a career-high eight on his way to a 30-point performance in a 69-60 win against Texas A&M last February.

He wound up his sophomore year as the SEC Player of the Year after averaging 16.1 points, deriving his points from high-volume three-point shooting and getting to the line.

He averaged 2.1 threes on a remarkable 42.8 percent three-point shooting clip. And he hit 92 percent of his 5.2 free throw attempts.

â€œFor me, itâ€™s more I knew I could do it all along. Itâ€™s really just about everything coming together. And once you get that opportunity on the floor, just seizing the moment. And really just not looking back. Thatâ€™s what I feel like happened. I was given that opportunity, and as soon as I got it, I ran with it. And thatâ€™s what Iâ€™m going to look forward to at the next level,” Quickley said.

When the pandemic canceled the college season and moved the NBA Draft, Quickley faced it like the way he did at Kentucky: being patient and keeping his faith in the process.

â€œThe hardest part this year was how long the wait was. In a usual draft process, you get done with the basketball season in April if you go far, and the draft is in June. But for us, it ended in March, and the draft was in November. So it was just a really long wait, and you had to really be patient with the process. And I feel like itâ€™s going to help us in the long run as far as being in the NBA,” Quickley said.

Quickley embraced the long wait and saw it as an opportunity to prepare himself better for the NBA grind. His long-time trainer and former AAU coach Jide Sodipo tirelessly worked with him to improve all the aspects of his game, especially his shooting, which will be his biggest weapon at the next level.

Calipari was quick to say Quickley’s shooting will be a boon to a Knicks team who finished 27th in three-point shooting last season.

Sodipo has so much faith in Quickley that his game will translate better in the NBA than in Kentucky.

â€œHe brings more to the game than just his shooting. Youâ€™ve only seen around 50 or 60 percent of his game [in college], I can tell you. And thatâ€™s gonna surprise a lot of people,â€ Sodipo told Empire Sports Media on the phone.

Quickley had met almost every NBA team, but none had the intel like what Kenny Payne, the former Calipari’s lead assistant, and Kentucky’s chief recruiter, brought to the Knicks.

“As far as the Knicks are concerned, I think they know more about him more than anybody team in the NBA,” Sodipo said before the draft.

Quickley, who was projected as a late second-round pick, was already more than happy to be selected in the first round. But he became doubly excited when he learned that the Knicks have traded for his rights because he gets to be reunited to be with Payne, the man who stuck with him and worked with him on closed doors throughout his roller-coaster ride in college.

â€œAt Kentucky, he was someone who would scream at you on the court or in practice. But he would be that first one with you in the gym that same night or early morning. He was someone that really sacrificed not only on the floor but off the floor too. As far as me getting to the Knicks, he is someone that is going to push me. I know heâ€™s going to push me to be the best I can be and take what I want. And Iâ€™m just glad to have him,” Quickley said.

Quickley has been in the same tough spot before. He already knew how to attack it.

This is the ‘why’ he was talking about.

He chose to stick with the loaded Kentucky team because he knew he’d face the same adversity in the NBA.

But Quickley has a faith bigger than the chip on his shoulder.