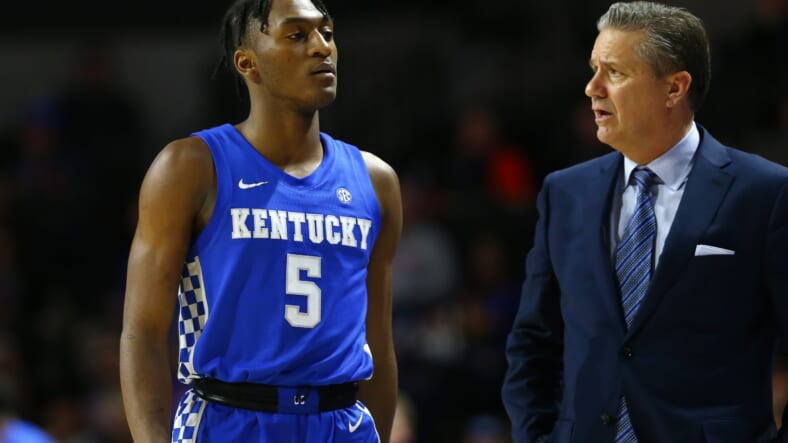 Mar 7, 2020; Gainesville, Florida, USA; Kentucky Wildcats guard Immanuel Quickley (5) walks to the bench as he gets fouled out against the Florida Gators during the second half at Exactech Arena. Mandatory Credit: Kim Klement-USA TODAY Sports

The New York Knicks have met Kentucky Wildcat Immanuel Quickley twice ahead of the 2020 NBA Draft.

Devin Booker and Tyler Herro were two of the most recent former University of Kentucky guards who got overlooked in the NBA Draft.

Immanuel Quickley is poised to be the next sleeper in the Draft from Hall of Fame coach John Calipari’s program.

“Immanuel Quickley was the Player of the Year in our league. Heâ€™s right up there with the hardest workers spending the most time in the gym, most committed players that Iâ€™ve ever had,” Calipari told Empire Sports Media via Zoom call. “You better give him a second, third, or fourth look before you pass on him because heâ€™s another one.”

Booker and Herro were selected 13th overall in the 2015 and 2019 NBA Draft, respectively. And they have both outplayed their draft position.

According to his trainer and former AAU coach Jide Sodipo, Quickley has talked to almost all NBA teams except the Portland Trail Blazers.

“They were trying to find out more about his character. Not only about basketball. What kind of a young man he is,” Sodipo told Empire Sports Media over the phone. “And as far as the Knicks are concerned, I think they know more about him more than anybody team in the NBA.”

Of course, the Knicks have former Kentucky lead assistant and chief recruiter Kenny Payne in their fold. Payne has the intel that might help persuade the Knicks front office to take a gamble on Quickley’s potential.

Quickley could be in play for the Knicks’ 27th or even 38th pick if he’s still on board. But Sodipo has a firm belief that his ward won’t last past the first round.

In most scouting reports, Quickly is a scoring guard with a knack for hitting the outside shot. It’s the same type of profile that has made Herro a riser in last year’s NBA Draft.

Quickley further cemented his status as a reliable scorer when he ended his collegiate career with 20 consecutive double-digit scoring games — the longest streak by a Wildcat since Malik Monk (30) in 2016-17.  On top of that, he has also hit at least one three-pointer in his last 11 games, including a career-high eight on his way to a 30-point performance in a 69-60 win against Texas A&M last February.

When he needs to, Immanuel Quickley can get the ball out of his hands……[checks https://t.co/PjGExpNrRg]…

Quickley has the shooting skill to carve out a role in the modern NBA. But he is more than just a shooter, according to Sodipo.

“People donâ€™t understand that he was a pass-first point guard all of his life. He loves to share the ball and bring out the best in his teammates. But you know, when you go to a school like Kentucky, you have to sacrifice,” Sodipo explained. “Sometimes, you have to play a role. Thatâ€™s whatâ€™s asked of you. What he did was he made the most out of it.”

To better understand and appreciate Quickley, you have to look at the roster makeup of the Wildcats.

During Quickley’s freshman year, Kentucky had a crowded backcourt with Hagans, Herro, and Quade Green.

Then in his sophomore year, Tyrese Maxey came in. Both Maxey (29.2 percent) and Hagans (25.8 percent) didn’t shoot well from the outside, and Quickley quickly jumped into the opportunity.

“Last year we went to three guards. I wasnâ€™t doing that early in the year, but as the year went on, I just said, ‘Immanuel Quickley, he needs to be starting.’ That means somebody else couldnâ€™t start. [Quickley] ended up being Player of the Year in our league, but he trusted me to figure it out.” Calipari said.

That’s part of the myth surrounding former Wildcats who have exploded in the NBA. Because Calipari’s program has been perennially loaded with talent, players like Booker, Herro, Bam Adebayo, and now Quickley have been victims of circumstances that, in a way, held their game back.

That’s one of the biggest reasons why Quickley has the “Sleeper” tag.

“He brings more to the game than just his shooting.  Youâ€™ve only seen around 50 or 60 percent of his game [in college], I can tell you. And thatâ€™s gonna surprise a lot of people,” Sodipo said.

Quickley can get hot quickly on offense. He could find a role similar to what Jamal Crawford and Lou Williams have perfected in their respective long NBA careers — offensive spark off the bench.

Defensively, Quickley has the length (6’9 and 3/4″ wingspan from his Draft Combine measurement last week) and the quickness to be a disruptor.

Great Saturday morning film session with SEC Player of the Year and Kentucky standout Immanuel Quickley. One of the best shooters in the draft with a high IQ and strong compete for level. Understands who he is as a player & knows how to add value in a variety of different situations. pic.twitter.com/f8VBIosOmt

If there’s anyone who knows Quickley’s game in and out, it’s Sodipo, who’s been coaching Quickley since 2015.

“He can handle the ball. Heâ€™s a true point guard that can score. He has a great basketball IQ. Heâ€™s great in pick and roll. He’s a great defender and can rebound, and thatâ€™s his game that people donâ€™t know unless you really watch his game and go back to his freshman year, his high school years,” Sodipo said.

Quickley was a decorated high school player and was one of the nation’s top point guards. He was a McDonald’s All-American and the 10th best prospect by Rivals.com and 12th by ESPN coming out of high school in 2017.

In his sophomore year, he hit a game-winning three-pointer at the buzzer to lead The John Carroll School Patriots to a 51â€“50 win over Mount Saint Joseph High School in the Baltimore Catholic League championship. He earned All-Metro Player of the Year recognition.

In his junior year, he averaged 23.7 points and 7.2 assists per game and was named to the First Team All-Metro. As a senior, he normed 20.8 points, 6.7 rebounds, 6.7 assists, and 3.7 steals per game and led the team to the Maryland Interscholastic Athletic Association A Conference title.

He was a shotmaker and a playmaker in high school, but he had to adjust his game in college to fit within Kentucky’s system.

Throughout the years, Sodipo has come to know Quickley deeper than everybody else in the 21-year old’s basketball circle.

Quickley comes from a family with a reputable background that speaks volumes of his character.

“His mother is a high school principal. His father is a church minister,” Sodipo said.

Quickley’s faith and a balanced lifestyle have helped him navigate a bumpy collegiate career where he understood that he had to earn his spot despite being a five-star recruit out of high school.

“He’s always in the gym, getting better at his craft. Heâ€™s somebody that he wants to get better,” Sodipo said.

“But when he was growing up, heâ€™s played drums and other musical instruments. He’s been studious and religious. He’s a really fine, talented young man.”

Quickley checks all the boxes for teams looking for a high-character guy who has NBA skills to match.

Sodipo has been training him non-stop in a private gym just five minutes from the Quickley’s residence.

Name a better shooting PG in the draft? pic.twitter.com/H9tTBmF15u

“Weâ€™ve been working on his game, getting stronger, working on his strength and conditioning, shooting, ball handling, passing drills and everything,” Sodipo said.

Quickley is determined to prove to everyone that he’s more than just a shooter and a sleeper in this unpredictable Draft class.