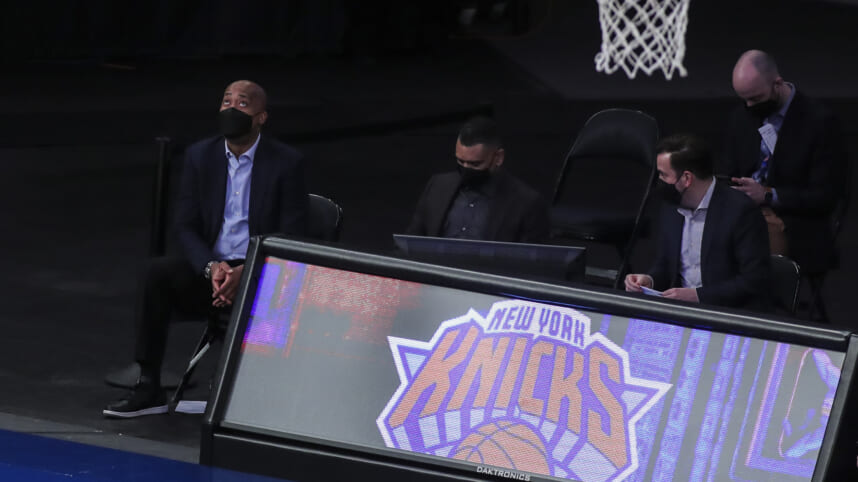 Much had been said about the New York Knicks‘ failed pursuit of three-time NBA All-Star guard Donovan Mitchell, who thought he was headed home.

The Knicks came close to sealing the deal, but talks bogged down at the last minute, allowing the Cleveland Cavaliers to sneak in and scoop Mitchell.

After reports came out that team consultant Gersson Rosas led the failed negotiation talks, Knicks President Leon Rose was criticized for having too many voices in his front office.

Rose took offense and defended the Knicks’ process in a pre-taped in-house interview with MSG Network’s Alan Hahn that was released Friday night.

Rose’s front office has retained Scott Perry as the general manager from the previous regime and his strong relationships throughout the league helped facilitate trades, especially with the Detroit Pistons, where he previously worked. He also plucked salary cap guru Brock Aller away from Cleveland as his chief strategist, and the Knicks instantly was praised for their shrewd dealings, squeezing extra picks left and right. The arrival of assistant general managers, draft guru Walter Perrin (from Utah Jazz) and Frank Zanin (a former pro scout with Oklahoma City Thunder), strengthened their scouting department, ending a long stretch of draft busts. Then there’s two of the most prominent voices — his close associate and friend William Wesley and Rosas, Minnesota’s former team president and long-time Houston Rockets executive.

In the end, Rose felt it was the right love [for Mitchell] at the wrong time. The Knicks were not ready to make a star trade that would limit their future flexibility. It was a move consistent with the Knicks’ prudent and patient approach, which characterizes Rose’s regime.

“It is my job to evaluate and look at trades and things of that nature in order to improve the team. And like I said, when I came in, we were going to be aggressive, we were going to be opportunistic. Our plan was to work with what we have re: player development, look at what’s out there. And just as a group, try to get better every day. And that’s what we’ve tried to do, and we went through that process there and ultimately, at the end of the day, we made the decision to stay put, and we’re thrilled with where we are. We’re thrilled with the team that we have, and we feel like we are positioned very well for the future.

While the Knicks continue to miss out on stars, they have drafted well under the Leon Rose era. The Knicks are banking on the internal growth of their young core. They will be parading a young lineup this season with only one player above 30 in former MVP Derrick Rose. Nine of their players are 24 and under. Their veterans in the starting lineup — Julius Randle, 27, and Jalen Brunson, 26, — are still young and in their prime years by NBA standards.

If the Knicks follow through on their player development, it will only be a matter of time before they position themselves where the Cavaliers are — ready to go all-in for the next available star.