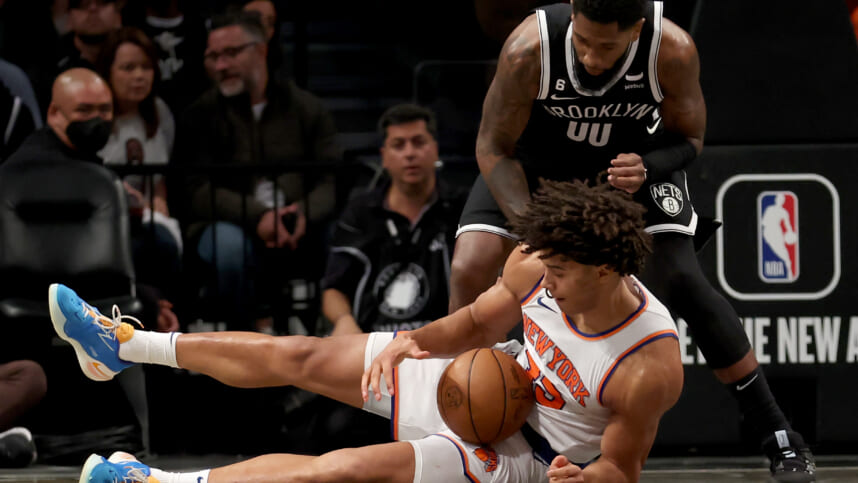 When the New York Knicks lost Mitchell Robinson to injury last week, his backup, Isaiah Hartenstein, was expected to get promoted.

It did. But it only lasted for one game.

In another surprising move Tom Thibodeau pulled off early in the season, he went with third-string center Jericho Sims in the last two games with mixed results.

Sims’ first start of the season came at the Target Center in Minneapolis, merely 12 minutes away from Cristo Rey Jesuit High School, where he started jumping out of the gym.

Thibodeau preferred the more athletic and stronger Sims over Hartenstein in a matchup with mobile All-Star big man Karl-Anthony Towns.

As expected, Towns schooled Sims, but the Knicks won big, buoyed by their hot outside shooting.

Despite a foul-plagued 17-minute stint, Sims still produced four points and four rebounds with one blocked shot in front of his family.

After getting Sims’ feet wet, Thibodeau thrust the 24-year-old center into more playing time (27 minutes) against the Brooklyn Nets.

Sims had one of his better performances last season against the Nets. He used his quickness and athleticism to rotate on defense — close out on the perimeter while providing help defense to Durant.

It didn’t work this time, as Durant punished the Knicks with a 29-point triple-double in a wire-to-wire 112-85 win. But despite the loss, Sims stood out with his physical gifts.

Sims, who solely operates inside the paint like Robinson, has yet to miss this season on seven field goal attempts.

“Well, the thing I do like about [Sims] is the pressure that he puts on. It forces the defense to collapse and open up other things for us. And he gets out of his screen pretty quickly, and he plays above the rim. So I liked that part of him.”

But there is still a side of him he has yet to show on the floor, which Thibodeau wanted to see.

“The thing is, he is still finding his way. He’s a very good passer. We haven’t seen that yet, but we’ve seen it in practice, so he’s got a big upside. We didn’t play well as a team [Wednesday night]. So, I like him a lot.”

Sims has zero assists in 54 minutes — 44 over the last two games — of floor time this season.

Robinson is expected to be re-evaluated over the weekend so Sims’ window is closing fast.

He has Friday’s game against the lowly Detroit Pistons to show more to get a slice of the rotation minutes when the Knicks are at full strength.