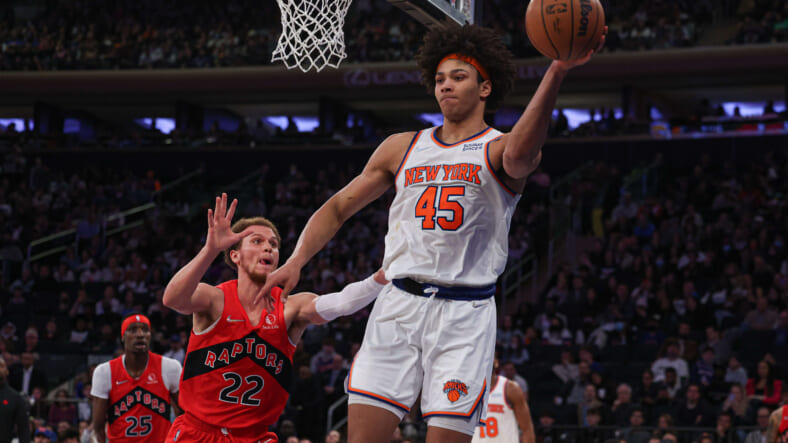 As expected, the New York Knicks have converted Jericho Sims’ two-way deal into a standard NBA contract, per multiple reports.

Shams Charania of The Athletic was the first to report the news.

Sims agreed to a three-year deal reportedly worth nearly $6 million, with the last year a team option. Per Fred Katz of The Athletic, Sims is guaranteed almost $3 million with triggers that would fully guarantee the second and third years before Labor Day of 2023 and 2024.

Sims, the Knicks’ 58th overall pick in the 2021 NBA Draft, worked his way into a standard contract with a solid showing toward the end of last season. The 23-year-old bouncy and athletic center averaged 2.2 points and 4.1 rebounds in 13.5 minutes. He played 41 games in the regular season, including five starts, while splitting his time with the Westchester Knicks in the G League.

New York coach Tom Thibodeau grew fond of Sims when the second-round pick started to carve out regular minutes late in the season.

“Because you’re going to do more than one thing, his ability to blitz a pick and roll or to hit to get the ball out of their hands and get back to the basket and get back out, then offensively putting pressure on the rim. That’s huge. And the rebounding was critical,” Thibodeau said in April. “[Jericho’s] gotten a lot better at it. He’s got great feet. He’s got strength. The athleticism is terrific.”

“We still haven’t seen the playmaking in the paint that he has, but as time goes on, we’ll see that. He’s a very good playmaker in the paint.”

Sims will split time with free-agent pickup Isaiah Hartenstein as the backup to Mitchell Robinson, who agreed to return on a $60 million, four-year deal.

The Sims’ signing opened up a two-way slot for this year’s second-round pick Trevor Keels. The burly point guard out of Duke will be eligible to play up to 50 regular-season games and split time with the Knicks’ G League team. Forward Feron Hunt, who trained with Sims and Julius Randle in Dallas this offseason, occupies the Knicks’ other two-way slot.

Sims, Keels and Hunt will all see action in the NBA Summer League in Las Vegas, where the Knicks open their schedule against the Golden State Warriors on Friday.