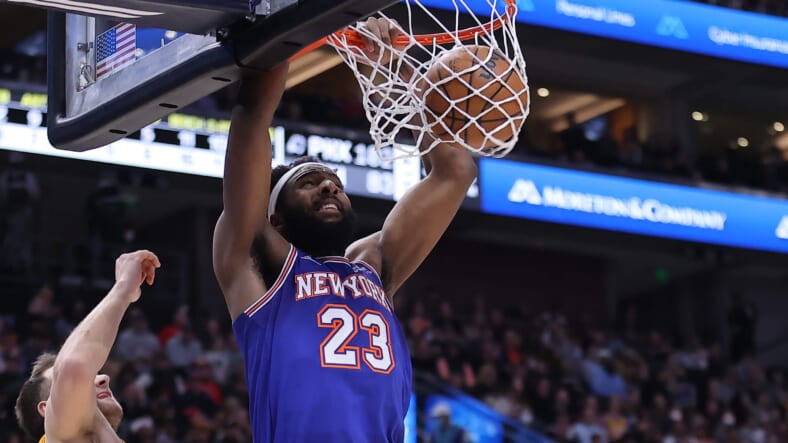 Mitchell Robinson is not going anywhere.

The 24-year-old center agreed to return and became the first New York Knicks draft pick since Charlie Ward to make it past his rookie contract. The deal is $60 million over four years, per ESPN’s Adrian Wojnarowski.

The 36th overall pick in the 2018 NBA Draft, Robinson flashed the potential to become an elite rim-protecting center in the league in his first four seasons in the league. He averaged 8.4 points, 7.5 rebounds and 2.0 blocks while shooting 72 percent from the field. He shot 74.2 percent in the 2019-20 season, eclipsing Wilt Chamberlain’s record of 72.7 percent he set for the Los Angeles Lakers in 1972-73.

Robinson’s efficiency from the field is mainly confined around the rim on putbacks and lobs. But his offensive limitation did not deter the Knicks from giving Robinson a huge payday, believing in his potential as he grows under Tom Thibodeau.

The Knicks used Robinson’s Bird rights to go over the cap after signing Jalen Brunson to a lucrative four-year, $104 million deal and Isaiah Hartenstein to a two-year, $16 million contract.

Robinson, who is about to enter his prime, will be the Knicks starting center, with Hartenstein serving as his backup.

The center market dried up after the first day of free agency, with only the Toronto Raptors showing interest in Robinson, per SNY’s Ian Begley. However, since the offseason began, there were clear signs that Robinson and the Knicks are closing in on a deal.

First, he wore a “New York or Nowhere shirt during his visit to his high school principal. Then, he followed that up with a social media post of New York with an interesting caption, “home.”

Home is where Mitchell Robinson’s heart is. pic.twitter.com/pSYmXM688T

For their part, the Knicks also reportedly continued their tradition of sending personnel to Louisiana to oversee Robinson’s offseason workouts.