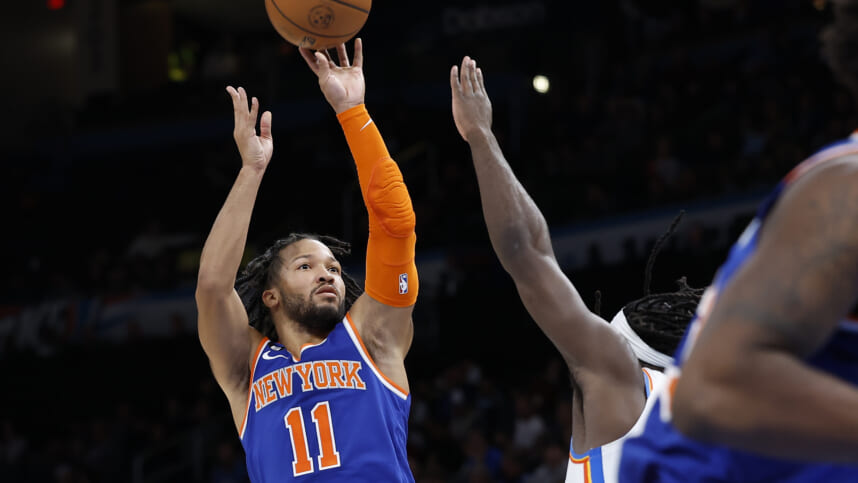 The humiliation of a staggering 145-135 home loss to the Oklahoma City Thunder before this brutal West Coast trip was Jalen Brunson and the New York Knicks‘ motivation.

It was time for payback.

Brunson exploded for a season-high 34 points to lead the Knicks’ redemptive win, 129-119, over the Thunder Monday night at the Paycom center.

The payback win punctuated a successful road trip — winning three of five games — for the Knicks in what was initially forecasted to be a brutal West Coast swing.

Brunson shot 13 of 14 inside the arc and came one assist short of a double-double.

They had the mentality that we didn’t last time we were on the court. My whole mindset was just, ‘Let’s play hard, let’s play harder than them for 48 minutes and whatever happens, happens.’ We were able to come out with a win.”

Brunson had plenty of help with Julius Randle and RJ Barrett bouncing back from dry shooting in Phoenix 24 hours earlier.

The resurgent Barrett hit 3 of 4 3s after going 2 for 25 over the previous five games. He finished with 25 points on 10 of 16 shooting with eight rebounds and two assists.

Randle also chipped in 25 after a nine-point outing against the Suns. He hauled down 11 rebounds for his eighth double-double of the season.

With all three firing on all cylinders, the Knicks worked their way to a blistering 52.6 percent shooting.

“[The Thunder] were a tough cover. I don’t know if we did anything differently other than we may be more familiar with them just because we just played them recently. And they got everyone’s attention [with last week’s performance].”

Aside from their Big 3 showing up, Quentin Grimes made a massive difference for the Knicks on the defensive end.

Grimes started for the second straight game with Cam Reddish still out with a sore groin, and the second-year wing slowed down Shai Gilgeous-Alexander, who had 37 points in their first meeting at Madison Square Garden.

Brunson scored the bulk of his points in the third quarter to keep the Knicks from collapsing.

The Thunder cut the Knicks’ 17-point lead into seven on more than one occasion, but Brunson responded each time.

Grimes contributed eight points, five rebounds and two steals, while Immanuel Quickley, the subject of trade rumors, had 18 and four assists off the bench.

But the Knicks did not come out unscathed as starting center Mitchell Robinson exited the game early with soreness on his previously sprained right knee.

The much-improved Jericho Sims again stepped up for Robinson with six points, seven rebounds and one shot block in 15 minutes.

The Knicks head home with a 9-9 record, with two home games against shorthanded Portland Trail Blazers and Memphis Grizzlies awaiting them this week.