Knicks lose again but Quentin Grimes provides silver lining: ‘A lot of pop to his game’ 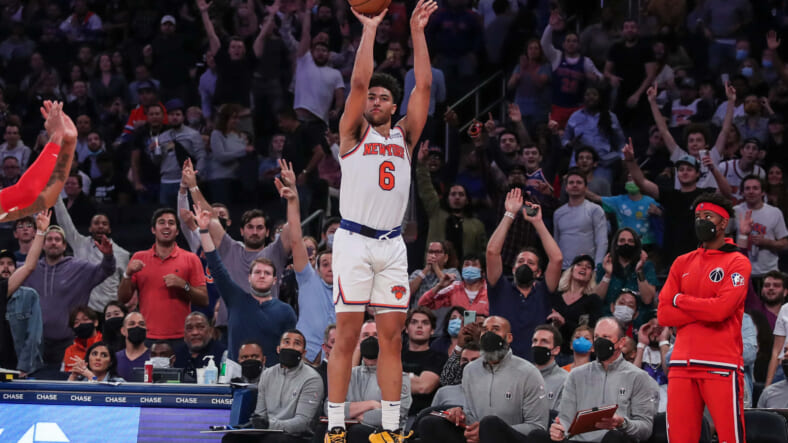 The New York Knicks dropped to 2-2 on their current road trip after the Phoenix Suns got loose in the second half of Sunday afternoon’s 116-95 loss.

Quentin Grimes provided the silver lining with his breakout game of the season.

Grimes’ much-delayed entry to the Knicks’ starting five was worth the wait with the second-year wing providing everything on both ends.

The 25th overall pick of the 2022 NBA Draft came through with 10 points and a career-high eight assists with five rebounds and a shot block in a team-high 32 minutes.

He made life uncomfortable for the Suns’ leading man Devin Booker, who was held to 3 of 10 shooting in the first half.

“I thought defensively, [Grimes was] strong. A lot of pop to his game. Good playmaking. He hit the open man. He created a lot of good situations for us.”

Grimes was expected to supplant Evan Fournier in the starting lineup this season after the Knicks held him out of the Donovan Mitchell trade talks and an impressive NBA Summer League campaign.

But a lingering foot injury caused him to miss the training camp and was deemed ‘situational’ upon his return as Cam Reddish flourished. It took a Reddish injury (sore groin) to get his chance finally.

He was pretty impressive, giving Thibodeau a good problem when Reddish returns.

But the injury to Derrick Rose, who exited the game in the second quarter with a sore right toe, could alleviate the logjam in the meantime.

The Knicks are reportedly shopping Derrick Rose and Immanuel Quickley, possibly to open up regular rotation spots for Grimes and Reddish..