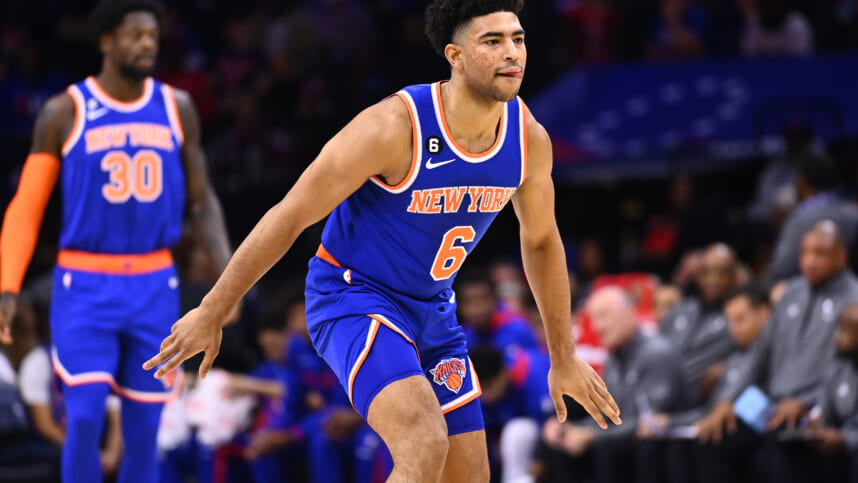 Quentin Grimes’ situational status is about to change after the New York Knicks suffered a double whammy Friday night at the Bay Area.

The Knicks lost rising wing Cam Reddish to a groin injury in a one-sided 111-101 loss to the defending champion Golden State Warriors.

Grimes only played 2:31 in mop-up duty, but Tom Thibodeau raised the possibility of Grimes filling in for Reddish in Phoenix.

The Knicks are scheduled to face the Suns Sunday afternoon and Oklahoma City Thunder on Monday, with uncertainty surrounding Reddish’s availability.

Reddish left the game with 2:07 remaining in the third quarter, with the Knicks trailing big, 83-66, and never returned. He finished with 11 points, his fourth straight game scoring in double figures, two rebounds, one assist, and two steals.

Thibodeau toyed with the idea of unleashing Grimes from the doghouse. Still, in the end, Thibodeau stuck with a rotation of Derrick Rose, Immanuel Quickley, Jalen Brunson, and RJ Barrett at the backcourt as they tried a last-ditch effort to overturn the game. Grimes was only inserted when the game had already been decided.

“I liked the rotation that we had. I was gonna put [Grimes] in when [medical staff] said Cam wasn’t returning, but the group that was in there cut the deficit to eight. So I wanted to see where it went.”

The Knicks indeed rallied to come within 98-90 with still 5:54 left on Julius Randle’s three-pointer. But the Warriors responded with an eight-point blitz to put the game away.

Grimes was expected to supplant Evan Fournier in the starting lineup, but a lingering foot injury robbed him of that opportunity. Upon his return, he joined Fournier on the bench, logging DNPs as Thibodeau labeled him situational in the wake of Reddish’s rise as a two-way force.

Now his much-awaited opportunity has arrived.

“[Grimes] has been moving great in practice, so hopefully, he’ll be ready to go. I think he will be.”

Grimes’ play in a more significant role will be highly scrutinized after the Knicks deemed him untouchable in the nixed Donovan Mitchell trade.

Can Grimes rise to the occasion?

The Knicks will soon find out.