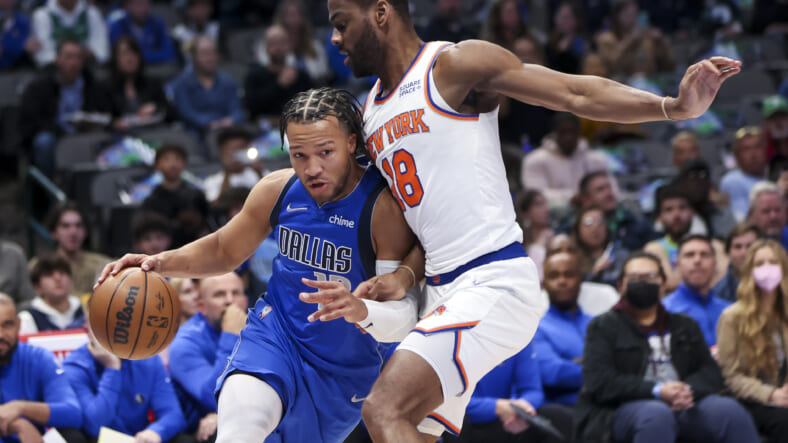 The New York Knicks are just one Nerlens Noel or Alec Burks trade away from officially joining the Jalen Brunson’s sweepstakes.

After the dizzying wheeling and dealing during last Thursday’s NBA Draft, the Knicks have emerged as a real threat to the Dallas Mavericks’ bid to retain Brunson. They are reportedly preparing to offer Brunson a four-year in the neighborhood of $100 million.

Whether they would get there or not will only add drama in the coming days leading to Thursday’s start of free agency.

“The Knicks are increasingly expected to assemble a four-year offer to Brunson valued in the $100 million range, sources said, after the former second-round pick (No. 33 overall in 2018) played out the final season of his first NBA contract at $1.8 million in 2021-22.” Dallas-based NBA insider Marc Stein wrote in his Substack newsletter. “When the season ended, sources said, Dallas believed that a four-year offer ranging from $85-to-$88 million — similar to Fred VanVleet’s deal in Toronto — would likely secure Brunson’s signature.”

The Knicks are raising the ante in this high-stakes poker game in their bid to land Brunson to man the point next season under Tom Thibodeau and Jalen’s father, Rick Brunson, whom the organization recently hired as an assistant coach.

The Mavericks, who have yet to show any signs of concern, at least publicly, still can offer Brunson a staggering five-year, $175 million deal if push comes to shove. Whether they will do that or not is another story worth anticipating.

But if the Knicks successfully clear more cap space and lure Brunson to a four-year contract that will start to pay him $25 million next season, that salary would rank top-15 among point guards next season granted Russell Westbrook ($47 million) and Kyrie Irving ($36 million) opt into their player options.

Sitting below Brunson’s projected salary floor for next season is Indiana Pacers’ Malcolm Brogdon ($22.6 million), a Knicks fallback option, Charlotte Hornets’ Terry Rozier ($21.4 million), who is also reportedly available via trade, and Toronto Raptors’ Fred VanVleet, a player who resembles Brunson’s built and career trajectory and the one that got away for the Knicks in the summer of 2020.

Another Knicks’ fallback option, Minnesota Timberwolves disgruntled guard D’Angelo Russell, sits at top-10 with $31 million owed him for next season.

Is Brunson worth that type of money?

Based on his postseason performance, yes.

Brunson averaged 21.6 points, 4.6 rebounds and 3.7 assists on 46/35/80 shooting split as the second-best player in a Western Conference Finals team during the playoffs. When Luka Doncic was out, he was the Mavericks’ best player and led them to a 2-1 series lead against Donovan Mitchell and the Utah Jazz.

None of the current Knicks players have done that since their postseason run two seasons ago.

Brunson may not be the fancy star the Knicks fan is craving for, but he has the pedigree of a winner from Villanova to the pros.

The answer is a resounding no.

The Knicks will still have plenty of cap room in the summer of 2023 even if they extend RJ Barrett to a sizable contract, presumably under the $181 million, five-year max he is eligible to sign. They will still have plenty of cap room to add one or even two maximum players (depending on what they do to the rest of their young players with club options in 2023) to a core of Brunson, Barrett and Julius Randle, who is set to earn $25.6 million in the second year of his extension. Or they could package Brunson or Randle to trade for a star down the road.

But first things first, the Knicks need to clear more cap space to pursue Brunson without needing the Mavericks’ help. If they successfully land Brunson this offseason, it will represent a significant milestone for the Leon Rose era in their pursuit of building a consistent winner in New York.