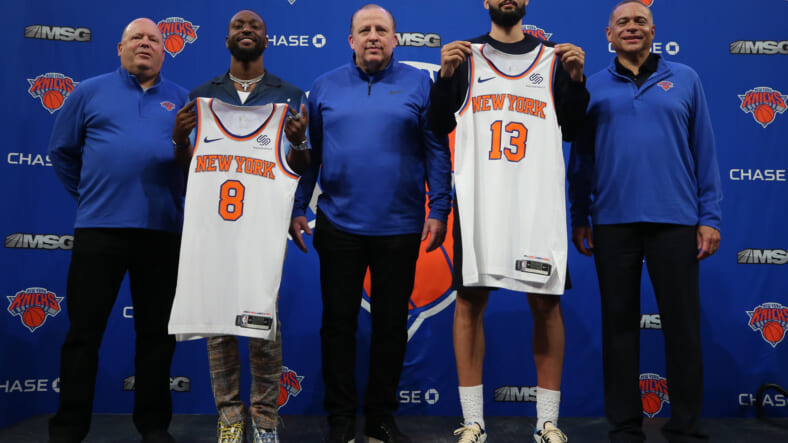 It cost the Knicks an 18-year-old prospect who may become a future All-Star center in their buyer’s remorse. But even as they continually preach patience, they do not have the luxury of time to work on a project like Jalen Duren. They already have Mitchell Robinson, who is more of a sure thing at this point when they are chasing a playoff berth in a crowded Eastern Conference.

In the grand scheme of things, the Knicks’ Draft Night moves have undone one of their blunders as they try to get back on playoff track — the requisite in luring a wandering star down the road that can vault them into legitimate contention.

The Knicks thought Duren, along with whatever package they offered to the Detroit Pistons, was enough to land them Jaden Ivey, one of the prospects with superstar potential from Day One. But as the Pistons stood pat as they also coveted Ivey, the Knicks pivoted in shedding Walker’s salary to move to their plan B (Brunson).

After a dizzying night of wheeling and dealing that netted the Knicks roughly $18 million in cap room and three conditional first-round picks, they are now just one move away from virtually sealing Jalen Brunson’s move to Broadway.

Despite giving up four second-round and a future first-round pick to acquire Duren from the Charlotte Hornets, the Knicks still have a surplus of four selections in each round in the next seven NBA Draft.

“Last night, we made three trades involving draft picks, which resulted in increased financial flexibility and additional draft capital moving forward,” Rose said in the statement. “We now have a total of 22 picks, 11 in the first round and 11 in the second round over the next seven years.”

“We have the ability to be active in free agency, as well as in the trade market. Our focus will remain to be strategic and thoughtful in our team building, doing it the right way, while feeding off of the momentum from the end of last season and prioritizing our player development program.”

The Knicks might need to dip again into their draft capital to complete the required cap space to sign Brunson outright. They could have shed Nerlens Noel and Alec Burks’ salaries at the trade deadline if not for their penchant for trying to win every transaction. The three-team trade with the Toronto Raptors and Los Angeles Lakers that would have also included Cam Reddish bogged down due to the Knicks trying to squeeze more draft capital on top of a future first-round pick and Goran Dragic’s expiring salary.

While Brunson may not become an All-NBA player, his attributes and winning pedigree could help the Knicks get closer to that missing piece/s. Unlike Walker, who was already on a decline when they signed him last summer, Brunson is 25 and still ascending to his prime.

From the start, the Walker-Knicks marriage lacked the foundation to last — the commitment to make it work. Cracks in the relationship surfaced early as Tom Thibodeau couldn’t trust Walker’s knees even in a diminished role. Walker had his moments but for the most part, it was frustratingly painful to watch his worst season unfold.

That will not be the case with Brunson.

Because Jalen, like his father Rick, is Thibodeau’s guy, not just the front office’s guy.

Despite the Mavericks repeatedly brushing off the Knicks’ threat, “it is real, very real,” as Marc Stein reported in the aftermath of Thursday’s NBA Draft.

Disgruntled fans may fault the Knicks front office for not trying hard enough to get their guy in the draft. But they could have done worse. They did not make any stupid move — a clear sign there’s no desperation on their part.

Despite Rose’s lack of openness to the media in articulating their plan, they came into Thursday’s NBA Draft with a clear goal of undoing last summer’s mistakes.

Success in the NBA front office requires a sound plan. Execution can be tricky. But adjusting as quickly as you can when things go sideways is the difference from getting stuck to bouncing back.

This Knicks front office showed Thursday night they are capable of doing that.