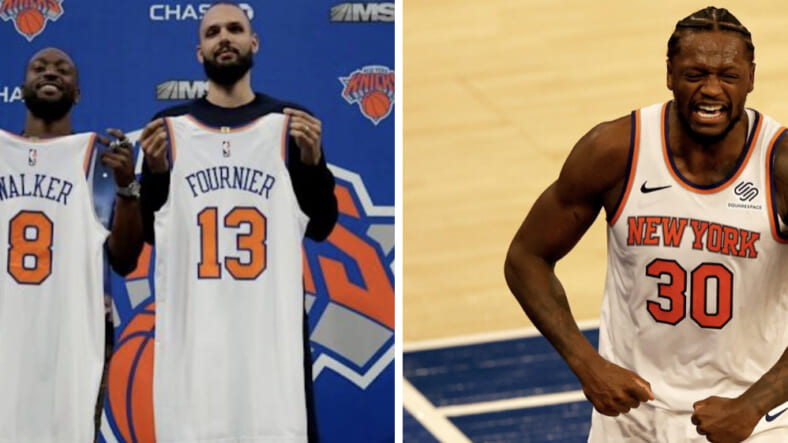 The New York Knicks have supercharged their offense with the acquisition of four-time All-Star Kemba Walker and Frenchman gunner Evan Fournier.

Payton has since hooked up with the Phoenix Suns while Bullock jettisoned to the Dallas Mavericks.

In theory, the Walker-Fournier tandem that played beautiful music together, albeit briefly, in Boston, is bringing more offensive punch that was sorely lacking when they fell to the Atlanta Hawks, 4-1, in the first round of the NBA playoffs.

When healthy, Walker is one of the better point guards in the league. A maestro in pick-and-roll who packs a deadly pull-up game and a decent outside shot (36-percent three-point shooter in his career), Walker will command the respect of the defense, which Payton never had last season.

Meanwhile, Fournier is a more dynamic playmaker and shot-creator in the wings that the catch-and-shoot specialist Bullock will never become.

Their addition is expected to lessen the offensive burden on Knicks’ All-NBA second team forward Julius Randle, who was shackled in the playoffs.

“It means a lot. Those guys are, obviously, very versatile players. They can do a lot of different things on the court. They can really shoot the ball. I’m excited about that. I think they are gonna make us more talented,” Randle said in a recent interview with Sports Illustrated.Â

While the Knicks have addressed their glaring weakness on offense which was exposed in the playoffs, the perception around the league is that the Knicks’ top-four defense (107.8 defensive rating) would take a hit.

Bullock was the second-best among all small forwards with 3.74 DRPM behind Brooklyn Nets’ Joe Harris (4.00 DRPM). Fournier ranked 26th among shooting guards with 0.16 DRPM, with RJ Barrett at third with 3.00 DRPM. Barrett is expected to slide to small forward and replace Bullock as the Knicks’ top perimeter defender.

“With Reggie, Elfrid, and all those guys, what they brought to our team was tremendous,” Randle said.Â So, obviously, [Walker and Fournier] gonna add a lot of offensively for us. But for us, as a team, our main thing has to be the main thing. And that is we come in every night and play with tremendous energy and defend. So as long as we do that, we’ll be fine.”

There is no doubt that the reigning NBA Coach of the Year, Tom Thibodeau, will not let their vaunted defense dip. Collectively, the Knicks are still one of the best defensive teams on paper with the re-signing of Nerlens Noel and the return of Mitchell Robinson from injury.

With more shooting and talent around him this time, Randle worked on his rim attacking and off the bounce game this summer with his trainer Tyler Relph as he expects less double team.

“I think we’ll see great improvement so we just have to make sure that we’re coming in locked in and play defense, get stops because the rest of the league doesn’t like doing that. Offensively, honestly, that’s really the easy part,” Randle said.