Knicks: Julius Randle aims to come back as a completely better player 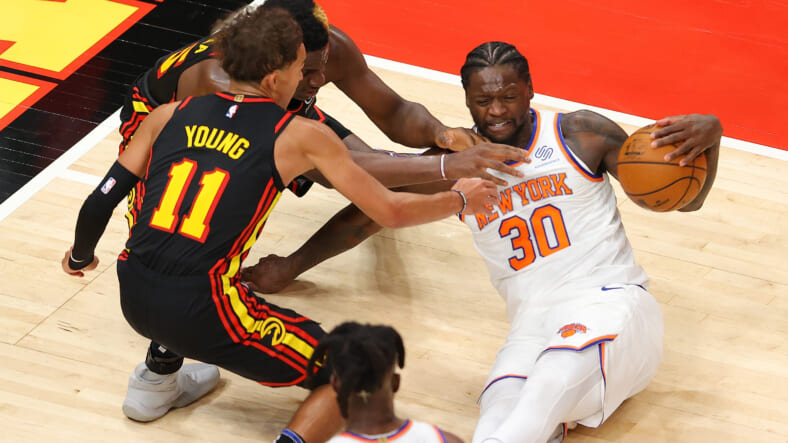 ATLANTA, GEORGIA - JANUARY 04: Julius Randle #30 of the New York Knicks grabs a loose ball against Trae Young #11 and Clint Capela #15 of the Atlanta Hawks during the second half at State Farm Arena on January 04, 2021 in Atlanta, Georgia. NOTE TO USER: User expressly acknowledges and agrees that, by downloading and or using this photograph, User is consenting to the terms and conditions of the Getty Images License Agreement. (Photo by Kevin C. Cox/Getty Images)

Summer is Randleâ€™s favorite season of the year, not because he can enjoy rest and recreation under the sunny weather. He loves it because of the grind.

After a disappointing end in the playoffs to his breakout season, Randle is back in his hometown in Dallas, reconnecting with Relph and Sanders.

â€œThere’s a lot that I can improve on to become a better player and help my team win some more games. And that’s exactly what I’m doing. I love the process,â€ Randle said on The Jump on the day his new backcourt mates â€”Kemba Walker and Evan Fournier â€” were formally introduced at the Garden.

A couple of weeks earlier, Randle agreed to aÂ $117 million, four-year extension with the Knicks that elevated his current contract to $140 million and five years.

Right after the news broke out, Relph tweeted out a congratulatory post accompanied by a photo of Randle working on his game.

â€Agree to $140 million and get straight to work! Itâ€™s been different! Nothing changes,â€ Relph said in the caption.

Agree to $140 Million and get straight to work! It’s been different! Nothing Changes #tylerrelphbasketball pic.twitter.com/x8Xsr06Wti

Last summer, Relph made it their goal to improve Randleâ€™s outside shot as his downhill threat would open up those opportunities. Randle outpaced their goal of 1.5 3s per game as he hit a career-high 2.3 per game on 41 percent. It was a big jump from just one three-pointer on 28 percent shooting during Randleâ€™s first season with the Knicks.

With Walker and Fournier coming in, Randle is expected to see less double or triple-team coverage he frequently commanded last season. His downhill threat and the three-point shot will always be there, and so is his signature corner mid-range jumper. Now, heâ€™s adding a pull-up threat from the top of the key.

Last season, most of Randleâ€™s shots were pull-up jumpers with a frequency rate of 43.4 percent, a big jump from the 20.5 percent rate the year before. His pull-up jump shot accuracy also increased from 35.3 percent to 50.3 percent in his second season with the Knicks.

Next season, Randle wants to improve from 46.3 percent accuracy on his shot after two dribbles and 45.4 percent after three to six dribbles.

â€œI love the grind and everything. So, I’m enjoying it right now. And I’m looking forward to coming back as a completely better player and help my team win,â€ Randle said.

His work ethic, as Relph described, is legendary. Randle got it from the late Kobe Bryant, who took Randle under his wings during their time with the Los Angeles Lakers.

â€If you have never seen it and you see it for the first time, youâ€™re in shock at how hard this man works. When I think Iâ€™ve won, he looks and says, â€˜letâ€™s go againâ€™ â€¦ Some run to work, others run from itâ€¦ Itâ€™s really that simple,â€ Relph posted on Twitter.

If you have never seen it and you see it for the first time you’re in shock at how hard this man works. When I think i’ve won, he looks and says “let’s go again” …. Some run to the work others run from it … it’s really that simple! @J30_RANDLE work ethic is legendary period pic.twitter.com/Uvf1i1lmpQ

The Knicks are reaping the reward of that legendary work ethic. In return, they have rewarded Randle by extending him with the maximum offer they can give this offseason and surrounding him with better overall talent than what he enjoyed last season.

Randle repays their trust by continuing to take on the challenge of leading the once laughingstock franchise with another legendary summer grind that hopefully becomes the bedrock of another playoff run for the Knicks.