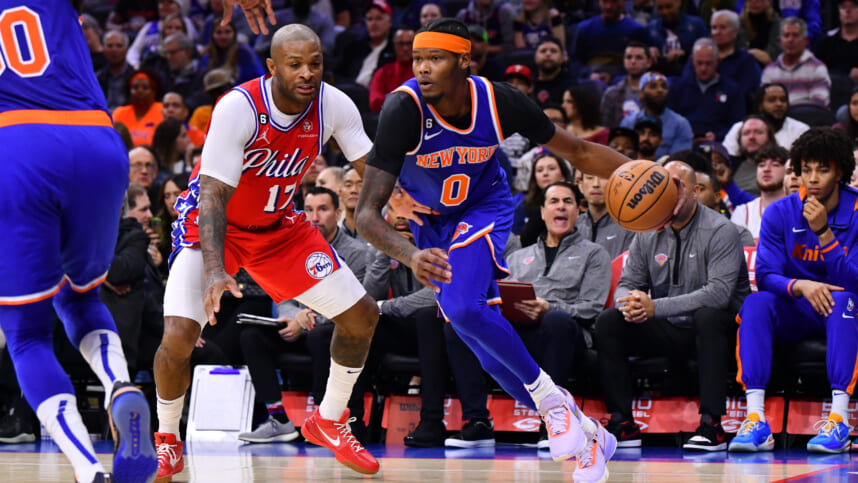 New York Knicks Coach Tom Thibodeau’s lineup tweaks and Cam Reddish’s desperate attempt to plant himself in the rotation saved them from what could have been a disastrous loss on the road.

The Knicks snapped a three-game losing skid with a come-from-behind 106-104 win Friday night against a Philadelphia 76ers team missing its top two players.

After Mitchell Robinson went down with a foot injury, Thibodeau used a Julius Randle-Toppin frontcourt for the first time this season. It worked against the 76ers, who were missing Joel Embiid (non-Covid illness) and James Harden (foot injury). New York outscored Philadelphia by 14 using that small-ball lineup.

Toppin dropped 13 of his 17 points in the fourth quarter. He hit the go-ahead three-pointer off a Randle assist with 1:27 left.

“We see [Toppin] shoot every day. I don’t think he’ll hesitate. He lets it go which is exactly what we want and what we need from him. He’s a gifted scorer and I think he’s worked extremely hard on his shot. He’s always had the ability to run the floor, a great finisher. Obviously, we all see that but he’s put a lot of work into his shot and he’s shooting the ball great.”

Toppin knocked down 3 of 6 from downtown. For the season, he’s hitting an insane 45.8 percent from 3 (11-of-24). His improved outside shot factored into Thibodeau’s decision to let him play next to Randle, who thrived as a center (17 points, 10 rebounds and five assists).

Meanwhile, Reddish entered the game as the odd man out after Thibodeau replaced Evan Fournier with Quentin Grimes in the starting lineup. He played like a desperate man, finishing with 11 points on a perfect 4 of 4 shooting and three assists. More importantly, New York outscored Philadelphia by 19 in his 15 minutes — as a closer in both halves.

Grimes was a flop in his first start of the season, with only two points and two quick fouls in the opening quarter. But this was just his second game coming off a knee injury. It will take some time before he gets his legs and rhythm back.

He started the Knicks’ run with a feed to Toppin for a dunk, and his sidestep beauty against one of the league’s top wing defenders, PJ Tucker, brought the Knicks within one, 93-92, with 2:44 remaining.

“I know what Cam (Reddish) can do. I don’t worry about Cam. Cam is that guy.”

A desperate Knicks team on an alarming losing skid collectively fought back in the face of adversity and a hostile environment.

“So it’s not a singular effort. Not a singular guy. It’s guys working in unison and then making multiple efforts.”

With Grimes, then Immanuel Quickley, and Reddish lessening his defensive burden, RJ Barrett grabbed a season-high nine rebounds and put up 22 points on an efficient shooting night (9 of 16).

Jalen Brunson led the Knicks with 22 points and a team-high seven assists. He came through in the clutch to seal their fourth win in eight starts.

The Knicks will have a short turnaround time from this hard-earned win as they head back home to host the Boston Celtics Saturday night in their first back-to-back schedule.

With Mitchell likely out, Thibodeau might roll the dice again on a Randle-Toppin tandem at some point to counter the Al Horford-led Celtics frontcourt. Isaiah Hartenstein (8 points, 10 rebounds) will also be in for a tough matchup against the Celtics’ stretch big.