Grading the Knicks’ NBA 2K22 Ratings: Are they accurate? 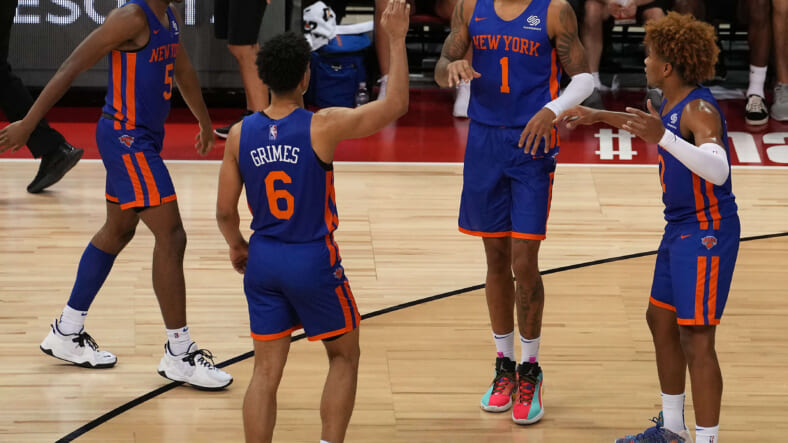 With the release of NBA 2K22 last Friday, we finally have our first look at the 2021-22 New York Knicks roster in 2K. This also means that Miles McBride and Quentin Grimes are playable for the first time ever. Let’s dive into these ratings and see if 2K got it right.

Can’t really complain about this one. Coming off the best season of his career where he won Most Improved Player(MIP), Randle has earned his place among the top ratings in the Eastern Conference. He should probably be at an 88 or an 89, but his performance in last year’s playoffs definitely played a factor in this year’s rating.

This one was really surprising. Not because of how he isn’t higher, but because 2K finally decided to show RJ some respect. 83 is honestly a really great jumping-off point this upcoming season for the 21-year-old. The rating isn’t too low or too high, it’s perfect.

Unsurprisingly, this is the lowest rating Walker has had since NBA 2K16. The 5-time All-Star had one of the worst seasons of his career last year and looks to bounce back on his hometown team. His dynamic scoring and playmaking abilities could transform the Knicks’ offense, leading to a ratings boost down the line. However, whether it be from his knee issues or just a regression of his skills, there is also a chance 83 isn’t the lowest we see his rating throughout the year.

After a terrific playoff series against the Hawks last season, D-Rose earned this 83 rating. Although he’s tied for the 2nd highest rating on the team, the former MVP will be coming off the bench this season. Look for him to make a real run at 6th Man of the Year and for this rating to stay pretty much the same all season.

There’s no question about it: When the 7’0 Robinson is healthy, there are not many other players in the league who can match his level of athleticism and energy. However, he’s coming off multiple injuries, the latter of which saw him miss the final 26 games of the regular season, including the series against the Hawks. If he’s able to stay healthy, there’s little-to-no chance that this rating stays the same. For now, it does make sense after not playing half of last season.

This is the first one that’s way off. 2k has had a tendency in the past to underrate guards/wings that can score in a multitude of ways. Any guard they perceive to not be able to defend well and not have playmaking abilities will have a hard time getting a rating over 80, especially if they play for the Knicks. This one just doesn’t make sense, though. It could be due to the fact that the devs may have been taking his stats with Boston into account too much. Before his trade to the Celtics, Fournier was putting up almost 20 PPG in only 30 minutes per game. Fournier is at least an 82, maybe even an 83. The intangibles he brings on offense, including his shooting and finishing skills, are better than any other 79 in the game. This rating isn’t accurate at all.

As one of the biggest steals in the 2020 NBA Draft, Quickley improved his rating from a 71 last year all the way up to a 79 by the end of the year. This is why this rating doesn’t really do it for me. To drop down a point after an entire offseason doesn’t make much sense. We’ll see how it unfolds for the second year from Kentucky, but there’s little doubt that he improves enough to get this rating over 80 by the playoffs.

Side note, Quickley is REALLY good at NBA2K.

As the defensive anchor of the Knicks throughout the final stretch of last season that culminated in the team making the playoffs for the first time in 8 years, Noel proved that he wasn’t your average backup center. Defensively, Noel is an incredibly reliable option off the bench. However, his offensive woes will always hamper any rating he’ll ever get from 2K.

If it weren’t for the competency and confidence shown by Obi Toppin at the end of the season last year, there’s a chance he’s nowhere near the 76 that he finds himself right now. The potential is clearly there, but will he find the ability to become more offensively dynamic? Only time will tell. But until we see him take a big leap, the rating he currently holds will stay the same.

Overall, the Knicks have a team rating of 83, which is the highest rating they’ve had since NBA 2K14.