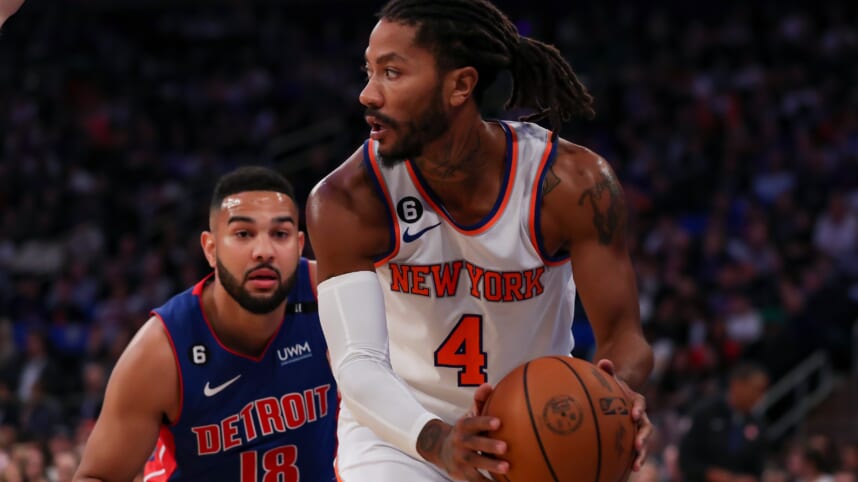 After a season-opening loss in Memphis, Jalen Brunson made it clear before they head home that all he cares about is a New York Knicks win on his Garden debut.

The Knicks bench mob made sure their new point guard got his wish.

Brunson did just enough, delivering 17 points and six assists in his first official game at the Madison Square Garden as a member of the Knicks, the team he grew up watching.

Then their bench, led by his childhood hero-turned-backup Derrick Rose, took care of the rest in an easy 130-106 win over Detroit Pistons Friday night.

Rose scored 11 points and handed out two assists in a five-and-a-half-minute spurt in the first half. His imprint was all over in the Knicks reserves’ 10-2 closing run in the opening quarter for their first double-digit lead, 30-20. They were never seriously threatened the rest of the way.

New York led by as much as 29 points. Detroit cut it down to 12 in the third quarter. But the Knicks bench mob restored order with another scoring blitz highlighted by dunks and booming threes.

“Our bench played a really good game. That’s critical for us. We need that from our bench. I thought they played well together. They played well as a group. That was the most pleasing thing.”

Immanuel Quickley snapped out of his shooting slump and paced the team with 20 points on 8 of 14 shots and seven assists.

Cam Reddish (6 points, 4 rebounds) had some moments in the second half after a slow start while Isaiah Hartenstein (6 points, 11 rebounds) was solid anew.

Rose finished with 13 points and six assists in only 16 minutes.

Six Knicks players scored in double figures in a balance effort. They had a season-high 29 assists.

RJ Barrett rebounded from his poor shooting night in Memphis. This time, he started the game making plays then the ball found him back. Barrett finished with 18 points on 8 of 15 shots and had four assists.

Julius Randle did not register a single assist but his constant movement off the ball got him easier looks at the basket. He had 15 points in only 25 minutes. No Knicks starter played over 29 minutes on a hot night like this when they shot a blistering 52.6 percent from the field and 42.1 percent from beyond the arc.

They shot the lights out in the first half, hitting 11 of 17 three-pointers that ripped the game wide open.

Jaden Ivey, the fancy of the Knicks in the last NBA Draft, had a near double-double (17 points and nine assists). Cade Cunningham was held to 15 points and did not score his first field goal until six minutes into the second quarter. The Knicks defense forced him to miss 10 of 16 shots.

The Knicks light three-game homestand continues on Monday against the Orlando Magic and Charlotte Hornets on Wednesday. After the easy schedule, they will embark on a seven-game stretch against playoff-caliber teams.