Can Quentin Grimes’ fast development propel him into a starting job for the Knicks? 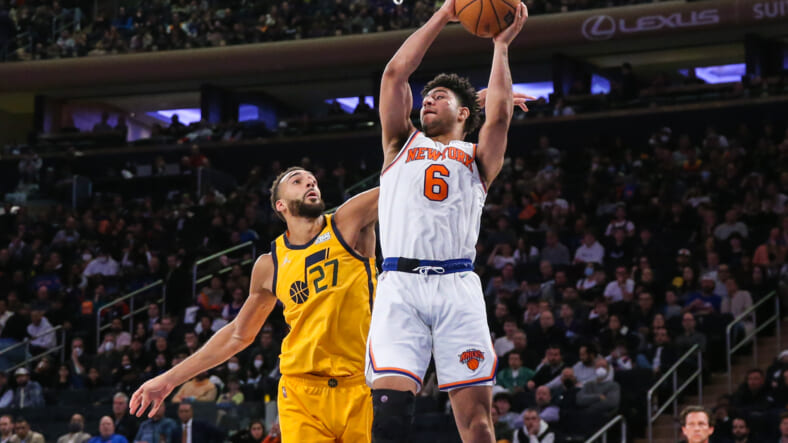 Quentin Grimes‘ sophomore season with the Knicks has been on hold due to a foot injury. However, his return is on the horizon, and with how much the Knicks value the 2nd year wing’s presence, the possibility arises as to if he could assume a much larger role this season, possibly as a starter.

The New York Knicks have something special in Quentin Grimes:

Grimes’ rookie season was an eye-opener for Knicks fans, shooting a superb 38.1% from 3-point range and owning a TS% (true shooting percentage) of 56%. He also demonstrated prowess on the defensive end, forcing lots of pressure on ball handlers and playing with great ball denial as an off-ball defender.

“I take pride in defense. Taking the challenge of guarding whoever the best player is gets me going when I wake up and we have to play a team like that.”

Quentin Grimes on his defensive mindset via SNY

Grimes seems to take pride in his offense as well, as he has taken complete advantage of the opportunities handed to him. In his first career NBA start on December 12, 2021, Grimes set the Knicks rookie record for most points scored in their first NBA start with 27 points. He also shot 7/13 from 3-point range that game, showing off his marksman shooting from long distance.

Grimes followed his dazzling rookie season with a stellar Summer League performance, averaging 23.5 PPG and averaging 1.3 steals, good enough to earn him All-Summer League First Team honors. With such a crafty skillset already in his young career, many fans want to see him in a much larger role, potentially being used as a starter over Evan Fournier – who finished Wednesday night’s game with 14 points and fouled out late in the 4th quarter.

With Fournier in the starting lineup, the Knicks’ defense has bitten the bullet, allowing 113.5 PPG to opposing teams, which is ranked 19th in the NBA. One of Grimes’ main specialties is perimeter defense. His size, length, and agility would match up nicely playing alongside a smaller guard like Jalen Brunson and an athletic wing in RJ Barrett.

Fournier has done his part on the offensive side by shooting the ball well from beyond the arc, shooting 38.8% from 3-point range in 84 games a Knick. However, Grimes has also demonstrated very solid shooting and confidence from outside.

Grimes fits the criteria of a solid 3 & D wing, and the Knicks might value that combination of solid shooting and solid defense over Fournier’s combination of elite shooting but lack of defensive versatility.

Knicks players see the hard work and skillset Grimes has and have expressed high amounts of confidence that he will continue to have success in the NBA and excel at each facet.

“He’s going to have a bright future in this league.”

Grimes himself has his sights set on perfecting his craft regardless of the attention that surrounds him. This past offseason, Grimes’ name was floated in trade rumors, especially during the Knicks’ pursuit of Donovan Mitchell.

Obviously, Grimes remained as a member of the Knicks, but nevertheless, he didn’t let the rumors surrounding his name distract him from working on improving his skillset.

“I was just in the gym working.”

Quentin Grimes on how he handled the trade rumors via SNY

Most importantly, Knicks head coach Tom Thibodeau also sees the improvement as well as his competitiveness on the floor. He says that his impact on the floor stands out and is an important contributing factor to winning basketball.

“I love Grimes. He’s a fierce competitor, can shoot the ball, can guard multiple positions. He’s only going to get better.”

Gaining the head coach’s respect is key to acquiring larger roles on the court for any basketball player, but especially young players looking for their big break in the league. Grimes has given Thibodeau more confidence in using him more often in games and in clutch time situations.

Quentin Grimes is among the many Knicks players that are improving hastily. His lightning-quick improvement could land him a starting gig very soon. Only time will tell if Tom Thibodeau will open that door for Grimes.