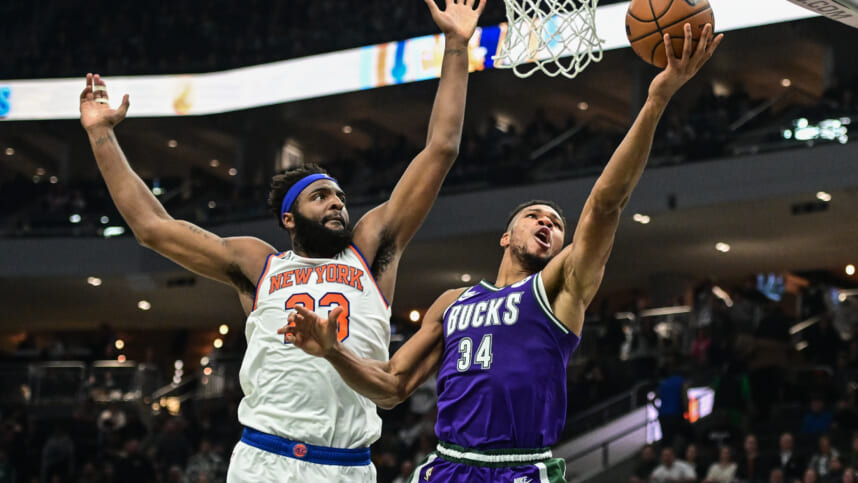 Despite the point guard upgrade, the New York Knicks still have a long way to go before they can hang with the East’s best.

Jalen Brunson was taken out of his comfort zone, while Julius Randle could not handle Milwaukee Bucks’ size. The result was a jarring 119-108 loss Friday night on the road, snapping their three-game win streak.

Owner of the league’s top defense, the Bucks used a backbreaking 18-0 run in the third quarter to create the separation.

Giannis Antetokounmpo followed up his back-to-back 40-point games with a near triple-double and was virtually unstoppable. The Greek Freak had Knicks starting center Mitchell Robinson in foul trouble early which set the tone of the game.

Antetokounmpo finished with 30 points, 14 rebounds, and nine assists. He teamed up with Jrue Holiday and Grayson Allen with eight points each in the pivotal third quarter.

The Knicks’ crisp ball movement was non-existent in the face of the Bucks’ championship-caliber defense.

Brunson (13 points) and Randle (14 points) were held to identical 3 of 10 shooting night which typified the Knicks’ offensive woes.

Brunson took responsibility for the loss.

“We started out really slow. A lot of that’s on me, and I gotta do a better job of just coming out and talking and just being who I am.”

Brunson only had a season-low two assists against three turnovers. It marked the first time he has more turnovers than assists.

Jrue Holiday outplayed him. The Bucks guard had 16 points and six assists. Jevon Carter, a pest on defense, even outscored Brunson with 14 points anchored on four three-pointers.

All Knicks starters had negative plus-minus.

“We know it’d be a game of spurts, and in the first half, I thought we competed pretty well. We hit a lull in the third quarter, but the second shot really hurt us. Then at the end, I thought we had more urgency and did a better job but you have to play for 48 minutes against these guys.”

New York’s defense kept Milwaukee shooting under 40 percent. But the Bucks took 109 field goal attempts, 16 more than the Knicks had, largely because of their 19 offensive rebounds.

Brook Lopez added to the Knicks’ problems with a double-double effort (14 points, 11 rebounds). The Knicks had no answer to Milwaukee’s twin tower.

Robinson had his moments — a block each on Antetokounmpo and Lopez — but was largely ineffective with five fouls. His backup, Isaiah Hartenstein, tried his best but could not keep up. The Knicks’ centers combined for 11 points, 17 rebounds and four blocks.

The Knicks will continue their daunting two-game road trip in Cleveland on Sunday against a red-hot Donovan Mitchell, the All-Star guard they could have used to poke holes in the Bucks’ defense.

Mitchell, who almost became a Knick in the offseason, is coming off a 41-point explosion in the Cavaliers’ huge 132-123 win over the reigning Eastern Conference champions Boston Celtics on the same night.