New York Jets Week 4: Getting to know the Pittsburgh Steelers 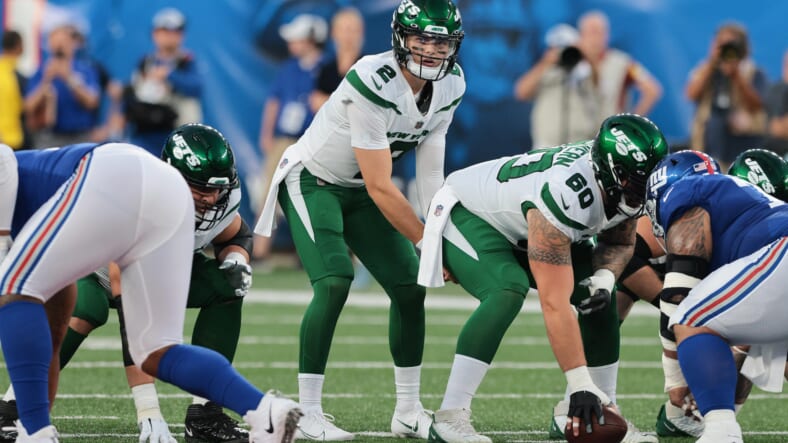 The New York Jets have what most would consider to be a must-win game ahead in Week 4. They are set to go against a 1-2 Pittsburgh Steelers team on the road that also has a lot to play for.

After reviewing the Steelers’ last two games on All-22 against the New England Patriots and Cleveland Browns, some of their strengths, weaknesses, and tendencies will be discussed below. Before getting into them specifically, this is a game that the Jets should ultimately win.

Their offensive line is their best strength:

Unfortunately for the Jets’ underwhelming defensive line, the Steelers’ offensive has executed at a good level. Across their front, as mentioned, from left tackle to right tackle, Dan Moore, Kevin Dotson, Mason Cole, James Daniels, and Chukwuma Okorafor have all done solid things. They have given up just five sacks, only seven teams have allowed less.

With the Steelers’ offensive line playing well against the run, the Jets will likely have to load the box to limit Najee Harris. The pass rush of the Jets may struggle again. It will be interesting to see if they dial up any blitzes or create confusion with stunts up front.

The defense does not jump out:

With the loss of T.J. Watt, Cameron Heyward has gotten some double teams. Expect the Jets to do the same in this one. Heyward has even gotten some run at edge every now and then.

The rest of the front seven is really nothing to write home about. Alex Highsmith is one talented edge defender who the Jets should pay some focus to. He likes to go to his spin move and can excel with it. When he lines up over the Jets’ left tackle, it will be important for the Jets to use a running back or tight end to chip with no George Fant in this one.

Against the run, over the last two weeks, the Steelers allowed Damien Harris and Rhamondre Stevenson to 24 carries for 118 yards in Week 2 (4.9 yards per carry). In Week 3, they allowed Nick Chubb to average 4.9 yards a run on his way to 113 total. The Browns had 171 total yards on the ground against the Steelers last week.

There is no reason why the Jets should not commit to Breece Hall and Michael Carter in a big way throughout this game. The two should both have at least 12 carries and combined have near 30.

They will mix things up from a coverage standpoint:

The Steelers have shown a tendency to keep things off-balanced from a coverage perspective. For starters, they can rotate their safeties late pre-snap or right after the ball is snapped, with one rep shown below as Minkah Fitzpatrick drops back late.

From there, they ran a variety of coverages in the last two games. They operate out of single-high a good amount and run some Cover-1 Man and Cover 3. In Cover-1, they mixed things up, either blitzing or using a robber underneath. In this play below, they ended up rushing a fifth defender.

As mentioned, they can go to Cover-3 in their single-high safety looks as well.

Lastly, on the coverage front, the Steelers run many different structures as stated above. They also showed some Cover-2, Tampa-2 (shown below), and even Cover-6 a few times.

If Fitzpatrick does not play, it could impact how the Steelers call the game. All in all, though, the Jets have to be prepared for a little bit of everything in the passing game.

They will look to simplify things for Mitch Trubisky on the move:

The Steelers’ passing attack is a fairly simple, self-explanatory one with Mitch Trubisky. They look to get him on the move. Trubisky can throw a good fastball out of the pocket.

Most of the route concepts are Sail/Flood three-level reads or Smash and Hi-Lo combinations. All half-field reads. The Jets should play aggressive in coverage and limit these easy completions.

As shown on this Sail/Flood concept, the Steelers will utilize some jet-motioning pre-snap.

The Jets should play their cornerbacks close to the line of scrimmage, not allowing the Steelers to easily complete concepts like their Smash.

Predominately, Chase Claypool works from the slot as shown on this Hi-Lo beater, where Michael Carter II will match him up.

While the Steelers have skill talent, Claypool, Harris, Diontae Johnson, George Pickens, and Pat Freiermuth, the Steelers do not operate from very many ordinary dropbacks or look to throw the ball over the middle of the field very frequently.