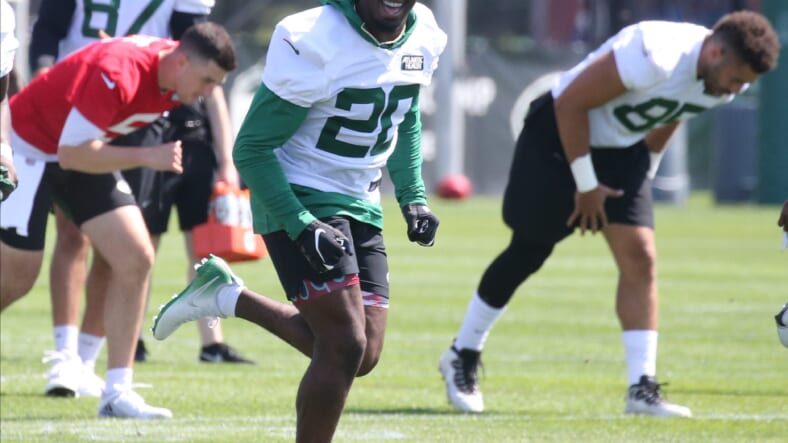 The New York Jets wrapped up day three of training camp Friday. Entering the day, the big news was the signing of linebacker Kwon Alexander. Robert Saleh stated that the eighth-year linebacker will work out his first two days before practicing.

On the injury front, Saleh stated that rookie tight end Jeremy Ruckert is nearing a return. He stated that the training staff felt that Ruckert had a “mini breakthrough” over the last week. Also, Braxton Berrios and George Fant remain out of 11-on-11 work. Saleh is hopeful both are back next week. Lastly, Saleh stated in his press conference that second-year cornerback Brandin Echols just got back to practice.

Stars of practice for the New York Jets:

The Jets’ skill position players reportedly had a strong day of practice. Running backs Breece Hall, Michael Carter, and Zonovan Knight all showed some good things. With Hall, the encouraging buzz continues to build. In the passing game, Zach Wilson did throw two interceptions but had two touchdowns as well. Corey Davis and Garrett Wilson were the beneficiaries of the two scores. Both of which were caught in the red zone period from Wilson.

In the trenches, first-round picks Mekhi Becton and Quinnen Williams supposedly had quality practices. The starting talent and depth of the Jets’ defensive line has been evident throughout the early going of camp. Lastly, it was a terrific day for the Jets’ pass defense. Third-year cornerback Bryce Hall continues to get some quality work with the starting defense. Both he and newly acquired strong safety Jordan Whitehead had interceptions. Whitehead recorded his in the red zone period.

Along with Saleh, Elijah Moore, George Fant, Laken Tomlinson, and John Franklin-Myers were all made available to the media.

Saleh said the Jets are “alternating days” between Sauce Gardner and Bryce Hall with the starters and backups. He said with Gardner being a rookie that it is just about helping him mentally as teams “seek corners in the run game.”

Franklin-Myers was asked about having opportunities to rush inside and gave a big smile. He stated, “I enjoy playing inside,” highlighting the chances he gets to rush over guards. However, he did also mention how last year was the “best year of my career” while playing at end. He concluded by stating, “Whatever they tell me to play, I’ll play.”

On staying at left tackle, Fant said the “vote of confidence from the team” means a lot to him. On his contract extension, Fant stated, “my job is to play football at a high level.”

Lastly, Tomlinson stated that the adjustment to being a Jet has been “awesome” and that he is “blessed” to now be with the Jets.