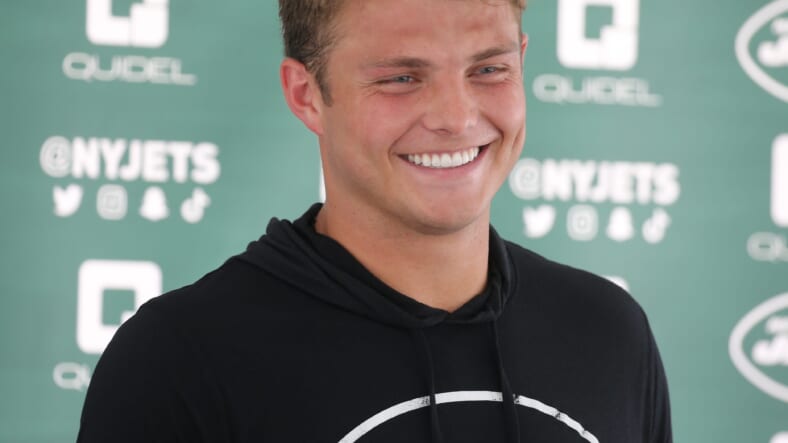 The New York Jets wrapped up their second practice of this week yesterday afternoon. The team is now just two days away from its first preseason game.

The biggest news surrounding the Jets is the status of third-year right tackle Mekhi Becton. Robert Saleh announced after practice that he has a right knee cap fracture and will likely miss the season. Some unfortunate news for the Jets.

There was still no DJ Reed, Ty Johnson, or Vinny Curry practicing with hamstring injuries. Also, Brandin Echols did not practice yesterday.

Jets players who had big practices:

As a result of the Becton injury, it was a day in which Zach Wilson was under constant pressure. The Jets had Max Mitchell and Chuma Edoga working with the starting unit yesterday. Wilson ended up being sacked eight times on 22 dropbacks.

Many front-seven defenders generated pressure. The dominance of Quinnen Williams in year four continues to be on display in training camp. The under-the-radar addition in speedy edge rusher, Jacob Martin, continues to show his ability. Defensive tackles Solomon Thomas and Sheldon Rankins were active in the backfield. C.J. Mosley also had a sack in camp yesterday.

Considering the moving parts along the offensive line, Wilson managed to have a solid day, going 8-for-12. Corey Davis and Garrett Wilson both reportedly had strong days. Also, Denzel Mims was supposedly involved with Wilson today and made some plays.

Robert Saleh, Zach Wilson, and Jeremy Ruckert were made available to the media following practice yesterday.

Saleh spoke on Becton and how he and the organization feel about him. “We love Mekhi. We appreciate everything he has done. His ride is not over, his story is not over. He’s got full support of this organization.” On the possibility of signing Duane Brown, Saleh had this to say, “I don’t have an update. I know Joe and his staff are working on all that stuff.” He concluded by saying the “feelings are mutual” between Brown and the Jets.

Saleh, on if the Becton injury shakes up the Jets’ first preseason game plans for Friday, he stated, “No, they’ve gotta play.” He went on to further state, “You can’t coach scared. You can’t play scared. If you do, it gets even worse. But at the same time, you’ve gotta be smart. We’ll evaluate everything, but at the same time, nothing’s changed as far as Philadelphia’s concerned.”

Wilson, on how he feels for Becton, “It hurts even more for him just because of what he’s been battling back from, from last year and everything. So, we gotta comfort him, make sure I’m there for him, and anything that he needs.”

Wilson discussed his growing connection with new tight end, Tyler Conklin, stating, “We’ve had great feel. And I think we’ve had some cool reps together of different things. But he’s a talented guy, and so I’m excited to work with him this year. He does a lot of really good things, so I’m excited to see how that can keep progressing.”

Ruckert, on where he is at after missing some time, “Kind of getting the playbook down really well. Figuring that out, not really as much thinking about that anymore… I feel like I’m in a good spot there. Now, it’s just about playing.”