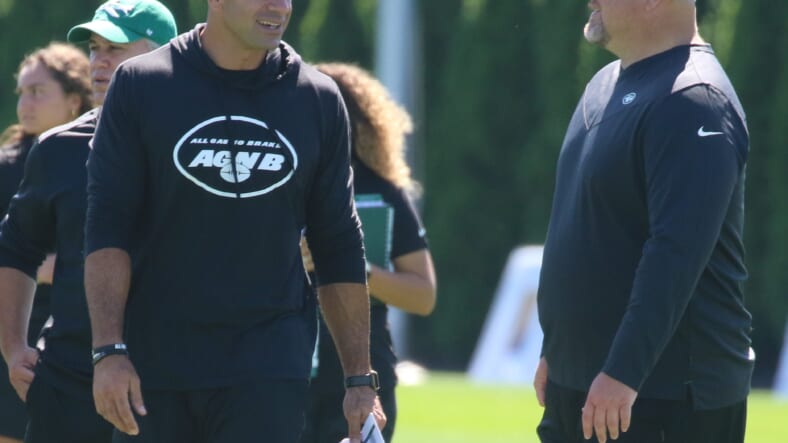 Today was the New York Jets’ final practice before preseason action starts. There were no pads worn for practice today.

Carl Lawson and John Franklin-Myers got vet days off. Robert Saleh stated that Lawson will play in the first preseason game Friday night. On DJ Reed, Saleh said that he is hopeful Reed is back next week.  No updates were given on Vinny Curry, Ty Johnson, or Brandin Echols. It seems unlikely at this point any of them will be available for Friday.

Who performed well in today’s practice:

Zach Wilson reportedly had a strong day for the Jets leading the offense. He attained some success in the red zone during the move-the-ball period. Wilson went 5-for-5 and spread the football around to Elijah Moore, Corey Davis, Braxton Berrios, and Tyler Conklin. Wilson threw a touchdown to Moore and a two-point conversion the following rep to Davis. Moore caught one impressive pass from Wilson. In total, Wilson went 13-for-16 in practice, per Zack Rosenblatt. He was supposedly on point in the short game today as well. Lastly, when running opportunities were there, Wilson took them.

if you need us, we’ll be watching this clip for the rest of the afternoon @ZachWilson x @e_moore03 pic.twitter.com/rQUa9TB7hg

Some of the Jets’ top rookies made an impact today. Sauce Gardner continues to thrive in training camp as a rookie for the Jets. Garrett Wilson caught one touchdown from Joe Flacco and did connect with Zach Wilson throughout today’s work.

Sauce Gardner, again, shutting down Garrett Wilson in the corner of the end zone one on one. Gave Zach Wilson nowhere to go.

Gardner has not had a bad practice in camp. #Jets

With the kicking competition, Greg Zuerlein went 5-for-5 today. Eddy Pineiro went 4-for-5 with a miss from 43 yards. It will be interesting to see how things play out even further in the preseason between these two.

Along with Robert Saleh, the Jets made many players available to the media after today’s practice. Tyler Conklin, Kwon Alexander, Carl Lawson, and Alijah Vera-Tucker all spoke.

Saleh was asked about the recent progress of Zach Wilson in camp and stated, “It’s been good. The game is slowing down. All those good things. Obviously, there’s another level that’s going to get reached. But really like the way he approaches every day. He’s unflappable in terms of just not really losing confidence and getting down on himself after a bad play or a bad day. Had a throw today and turned right around to Mike, they had a discussion about it and kept it moving. Really like where his heads at right now. Really like where the entire offense is, especially in those move-the-ball periods it seems like they’re executing at a high level.”

Conklin, on his chemistry with Zach Wilson, “That’s kind of been our goal throughout camp is just every day come in here, get a little bit better. As we keep getting more comfortable with the offense together and how he wants stuff ran and how I run stuff. I think every day we kind of get just a little bit more on the same page.”

Vera-Tucker on the guard duo of him and Laken Tomlinson, “Me and Lake, we have the same personality. You know, at the end of the day, we don’t hear all that guard talk, you know, two best guards stuff like that, we just come in and work, put our head down.”

Lawson stated that he is “excited” to finally play again on Friday. He spoke on his own comfortability coming along, but still wanting more “slowly but surely I’m getting there.”