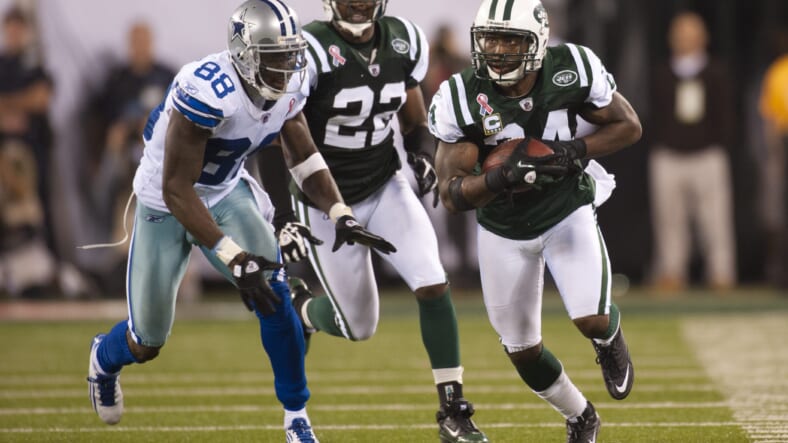 EAST RUTHERFORD, NJ - SEPTEMBER 11: Darrelle Revis #24 of the New York Jets runs the ball after an interception against the Dallas Cowboys at MetLife Stadium on September 11, 2011 in East Rutherford, New Jersey. The Jets defeated the Cowboys 27 to 24. (Photo by Rob Tringali/SportsChrome/Getty Images)

From one great New York Jets cornerback to another. First-round pick in 2007, Darrelle Revis, arguably the best Jet in the history of the franchise, is a fan of the organization’s top draft pick from earlier this year, who is trying to replicate his success, Sauce Gardner.

Revis, who will be inducted into the Jets Ring of Honor in nearly a week, was present at the facility in Florham Park this afternoon and was made available to the media.

Revis was asked about a variety of things, ranging from his gratitude to be a part of the Jets Ring of Honor to some of his memories with the team and the immediate success of another talented Jets corner in Gardner.

On his emotions with the high honor, Revis expressed it feels “surreal” and that he is “overwhelmed” and “excited.” He said he had “butterflies” being back at the Jets facility today.

He talked about how a highlight for him was just being drafted by the Jets, bringing up how “they jumped up in the 2007 draft 10 slots”. Revis shared that the story of how the Jets traded up for him was “a little bit nuts.”

Revis was asked about his well-known, special practice habits. He stated that Rex Ryan would attempt to hold him out of practices to help Revis physically, but he would always try to “sneak in” to gain any rep possible. Ultimately, Revis said the preparation was always key for him to be at his best on game day.

Finally, on what he has seen in the rookie Gardner, Revis said he thinks “the sky is the limit” and that he “loves his game.” Revis said that Gardner and DJ Reed are “doing a great job of being a dynamic duo.”

Revis feels that Gardner “can take on that legacy as being a New York Jet great.” He said he “sees a lot of similarities” between him and Gardner, even from a maturity standpoint, as guys who just love the game.

Revis, with his 139 passes defended (31 in 2009) and 29 career interceptions (six in 2009), set the standard for great Jets cornerbacks. In just nine games, Gardner is holding that expectation up with 13 pass breakups and two interceptions.