What went wrong in the Giants’ Thanksgiving loss to Dallas? 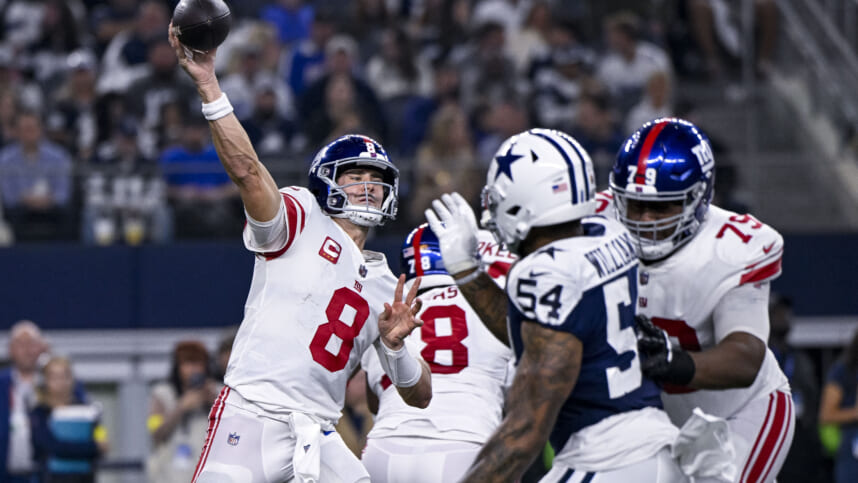 Nov 24, 2022; Arlington, Texas, USA; New York Giants quarterback Daniel Jones (8) throws the ball against the Dallas Cowboys during the second half of the game between the Cowboys and the Giants at AT&T Stadium. Mandatory Credit: Jerome Miron-USA TODAY Sports

The New York Giants’ Thanksgiving dinner was spoiled on Thursday, losing the holiday matinee to the Dallas Cowboys 28-20.

The Giants have now lost consecutive games for the first time this season, falling to 7-4 on the season and 2.5 games out of the NFC East division lead.

Thursday’s game started out smoothly for the Giants, recording two takeaways and entering the half up 13-7.

However, things completely turned south in the second half. What went wrong?

The Giants’ defense disappointed in the second half

After playing stupendously in the first half, recording two INT – their most in a half this season – and only letting up one touchdown, the Giants’ defense looked completely different in the second half.

To open the 3rd quarter, the Giants allowed 38 yards on five consecutive carries, an average of about 7.6 yards per carry in that sequence. They allowed 47 yards on the ground in that drive alone, which would soon result in a Cowboys touchdown that gave Dallas a lead that they wouldn’t relinquish.

The Giants seemingly had no answer for Dallas’ deadly running back duo of Ezekiel Elliott and Tony Pollard, as they combined to rush for 152 yards total in the beat down.

The absence of Giants cornerback Adoree Jackson was the catalyst to the secondary’s issues, especially in the second half, as they allowed 133 passing yards as well as allowing seven completions for over 10 yards in the second half.

The Giants’ offense was silenced after a solid first half

The Giants’ first-half offense was economical, with some big plays mixed in. They scored 13 points through the first two quarters that, included a couple of firsts for New York.

Graham Gano opened the scoring in the first with a 57-yard field goal, which tied the longest FG in Giants’ history.

In the second quarter, Quarterback Daniel Jones connected with Darius Slayton for a 44-yard completion, New York’s first completion of 40+ yards all season, which would soon be followed by a Saquon Barkley touchdown to give the Giants the lead early in the 2nd quarter.

However, the second half was a completely different story. The offense managed to put up zero points for all but the final 12 seconds of the game. They had a really hard time moving the ball downfield and converting third and fourth down plays after moving the ball really well in the first half.

The big momentum swing came midway through the 3rd quarter when the Giants – trailing by one – went for it on 4th and 1 at their own 48-yard line and could not convert, resulting in a turnover on downs.

This was seemingly the turning point of the game, as all the life had been sucked out of the Giants after a golden opportunity to continue a critical possession was wasted, and New York was never able to recover from the dropped pass.

The two culprits of that big play, Daniel Jones and Saquon Barkley, spoke about it during their postgame presser, and both held themselves accountable for the key mishap.

“Just a bad throw. I gotta get it out in front of him. Bad throw. Can’t miss that.”

The Giants now find themselves on the ropes with regards to their division title hopes after losing this critical game, and their most realistic route to the playoffs appears to now be through the Wild Card.

They must do better at pulling off the key plays that will keep opposing defenses on their toes, as their offense and defense were in complete disarray throughout the entire second half.

The Giants will look to use the extra time off given to them to regroup and regain their footing when they take on the red-hot Washington Commanders in another huge division game on December 4th.