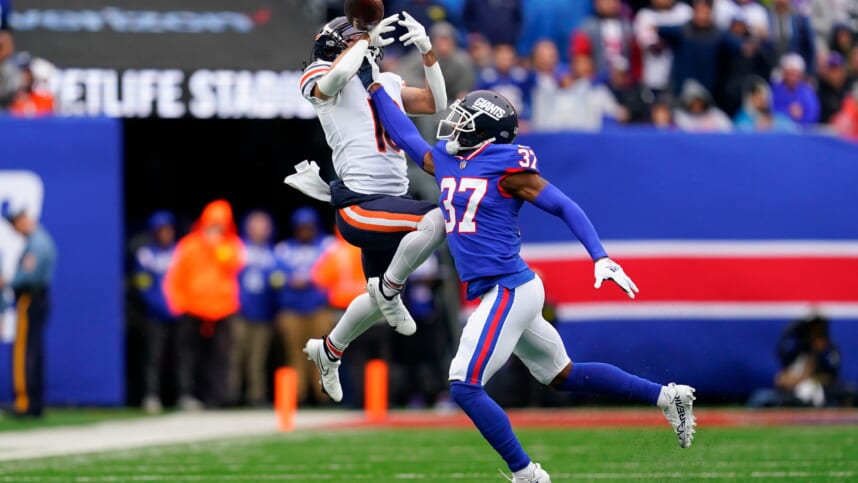 With the New York Giants dealing with various injuries all across the team, they have needed some guys to step up amidst the hardships, and Fabian Moreau has been the unsung catalyst to their highly unexpected 6-2 start this season.

Moreau was signed to the active roster on September 28. Initially intended to be a backup cornerback, the injuries to cornerback Aaron Robinson and linebacker Azeez Ojulari have changed that. New York brought on the 6-year veteran to fill the holes created by injuries on the defense.

The New York Giants have gotten tremendous value out of Fabian Moreau:

Since Week 4, Moreau has played at least 72% of the defensive snaps for the Giants, and he has also recorded three games of at least five combined tackles in that span, bringing his season total to 25 tackles. He is on pace to shatter his career-high for tackles in a season, which is currently 44 with the Atlanta Falcons in 2021.

Moreau has been superb in the secondary for the Giants, deflecting a lot of passes with his quick hands and good awareness. He has been making very solid plays under defensive coordinator, Don “Wink” Martindale’s wing.

His signature moment came in the Week 7 thrilling victory against the Jacksonville Jaguars, where Moreau made a beautiful tackle at the Goal Line to stuff Christian Kirk and stop him short of a game-tying touchdown as time expired. That play has been the highlight of his underdog story this season.

Moreau says that he had a strong feeling that the route Kirk took was coming and that making the game-saving tackle was pure instinct.

“I just expected him to get into the end zone before he threw it, and he threw it a little sooner, so I got to make that tackle.”

Fabian Moreau on his game-saving tackle via New York Post

First-year head coach Brian Daboll was pleased with the stop by Moreau but acknowledges how missed opportunities previously in the game caused the game to end in a nail-biter.

“It was a good win, {but} it shouldn’t have come down to that, though.”

While the Giants still have things to work on with their young group, it has got to be a good feeling for Brian Daboll and the rest of his coaching staff to have guys like Moreau step up in times of adversity from a health standpoint.

Giants GM, Joe Schoen, credits the coaching staff for motivating players like Moreau to come through during these times and acknowledges the constant flipping around of depth charts that this Giants team has had to face.

“We lead the league with 12 players that were not here in September that have played offense and defensive snaps for us. Whether that’s (linebacker) Jaylon Smith, (cornerback) Fabian Moreau, Tyre Phillips started at right tackle. A testament to our coaching staff, we’re bringing in new players and they got to stay here late hours and get these guys ready to play. A lot of these guys have played winning football for us.”

Joe Schoen on new players stepping up via Giants.com

The Giants have their bye this week and will head back home to play the Houston Texans in their Week 10 matchup. Moreau will look to continue his strong season then.