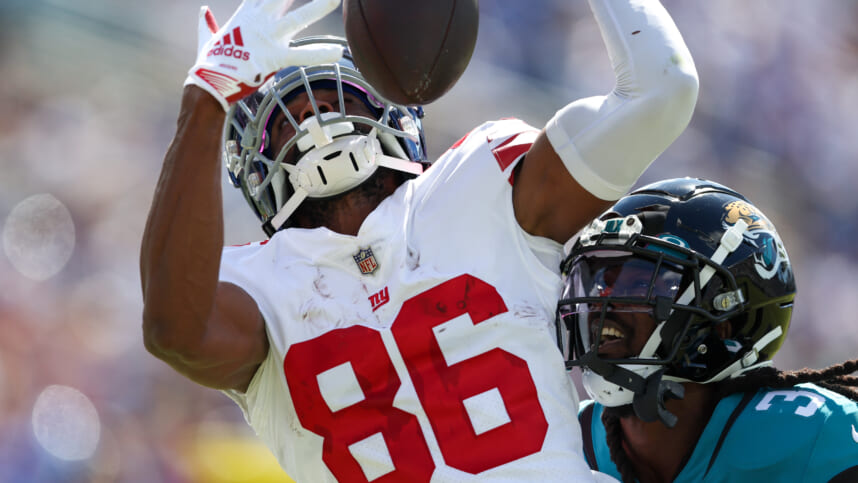 Even though the New York Giants are 7-3, they still have a lot of unanswered questions about several key positions for both now and future seasons.

The team has dealt with a ghastly amount of injuries this season, with their most recent blow losing electric rookie WR Wan’Dale Robinson for the remainder of the season with a torn ACL.

Along with the injuries, inconsistent play from some of the other positions require attention to put towards them when the team makes the roster decisions for the future.

Positions the New York Giants need to address next off-season:

The biggest and most glaring issue the Giants have had this season is at the Wide Receiver position. They have lost virtually their entire initial receiving core to injuries or by trade, and Kenny Golladay’s poor play has only exacerbated the issue.

Therefore, it is no shocker that the Giants rank near the bottom of the league in passing offensive categories, including ranking 28th in passing yards, 27th in touchdowns, and dead last in 20+ yard completions.

Without a true number 1 option at the receiver position, New York lacks a true playmaker for Quarterback Daniel Jones. The Giants have been heavily involved in the Odell Beckham Jr. free agency sweepstakes, with a possible reunion on the horizon that would give the Giants a true go-to target.

Other options include missed deadline targets such as Broncos’ Jerry Jeudy and Panthers’ DJ Moore.

The Giants’ secondary has been one of the biggest revelations this season, with them only giving up 10 TDs all season, a mark that is tied for 5th best in the NFL.

However, in the past few weeks, the secondary has faced some adversity, most notably at the cornerback position, with Adoree Jackson being sidelined for 4-6 weeks with an MCL sprain, Fabien Moreau dealing with an oblique injury, and Jason Pinnock battling a jaw injury after coming up as an injury replacement himself.

The tremendous decimation in a secondary that is already missing Xavier McKinney and Aaron Robinson was shown in its fullest form in their 31-18 loss to the Detroit Lions on Sunday. The Giants were unable to stop Lions’ RB Jamaal Williams, who scored 3 TDs in Sunday’s beatdown.

With the Giants now having to rely on backups such as Darnay Holmes and Nick McCloud for their playoff push until the injured players get healthy, New York has to figure out what they have in these guys before making the final decisions for both this season and the next. They will also need to monitor the health of the injured players and see what progress they have made in their recoveries.

The linebacker position has been full of question marks for this year’s Giants defense. Tae Crowder’s lackluster play resulted in him being benched in favor of Micah McFadden, with Crowder only playing a total of 45 defensive snaps over the last three games combined.

Crowder has missed a staggering 15.7% of his 43 tackles this season, and McFadden has shown promise as a solid linebacker so far in his young career. While there have been some blips in McFadden’s radar, those things can get cleaned up as he establishes himself in the league.

However, having to experiment with a rookie mid-season is the highlight of the issues surrounding the position. Linebacker Jaylon Smith has been weak in pass coverage and pass rush this season, allowing 12.8 yards per completion (career-worst), and has only had one pressure this season to go along with 0 hurries.

The Giants need to see what they can get out of McFadden to get them through this season before making decisions about next season, and the expectation would be that they will look for suitable upgrades at the linebacker positions.

The Giants signed Jon Feliciano as a free agent this past offseason to play him at center while Nick Gates was still recovering from an awful leg injury suffered in 2021. Gates looked poised to be the team’s cornerstone center before the injury, allowing 0 sacks in the entire 2020 season.

Prior to this season, Feliciano had only played two career games at the position, as he is more familiar with right guard position.

Despite playing out of his natural position, Feliciano had held his own, playing nearly every offensive snap before suffering a neck injury in Week 11 that saw Nick Gates slide back into center for a portion of Sunday’s game.

Given that it has not even been a full month since Gates returned from that horrific leg injury, the Giants need to assess their options at the position carefully as New York appears to be easing Gates’ way back into the offensive scheme.

With Feliciano expected to be a free agent after this season, the Giants will have to consider if Gates’ leg is fully healed enough to be slotted back into center full-time next season, otherwise, they may have to search for another option. They also need to consider if he will be the same player he was back in 2020, as all that missed time could affect his play.

The Giants have several players listed on the injury report for their Thanksgiving matchup against the Dallas Cowboys. Some are already expected to not play, and some may be out for an extended period of time, so the Giants will have to address several positions on the roster now.