Should the New York Giants consider trading for Russell Wilson? 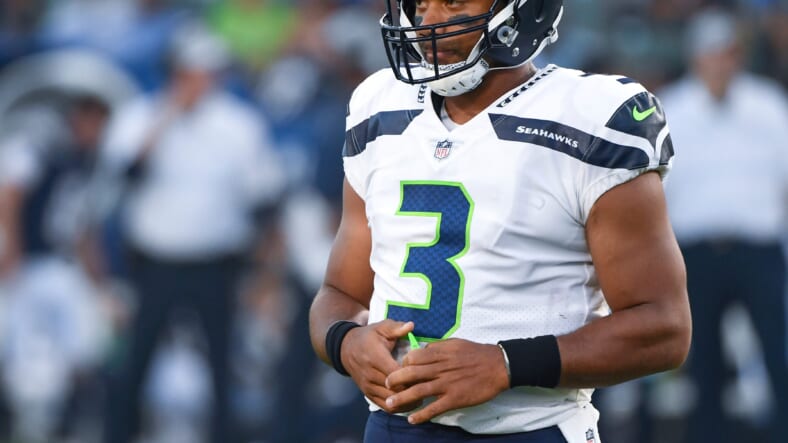 The New York Giants have been connected to trade rumors regarding one of the best quarterbacks in the NFL. Seattle Seahawks quarterback Russell Wilson is reportedly considering requesting a trade. According to Jordan Schultz, one of the teams Wilson would waive his no-trade clause for is the New York Giants. Is this a trade the Giants should consider?

Why the Giants should not consider trading for Russell Wilson

However, the Giants have many needs on their roster. Those two first-round picks could be allocated to the offensive line to transform the unit for the Giants. Trading away both of those picks, plus another first-round pick in 2023 might be too rich for the standards of many fans and general managers.

While the Giants might have the draft capital to acquire Russell Wilson, they do not have the salary-cap space to make this move. The Giants are projected to have $4.5 million in cap space this offseason. Russell Wilson’s 2022 cap hit is $37 million. The Giants will be able to create cap space by cutting and trading players this offseason, but they might have to make too many sacrifices to afford DangeRuss.

Why the Giants should consider trading for Russell Wilson

Wilson is 33-years old and in the second half of his career. But for the best quarterbacks in the NFL, 33-years-old does not mean the window is closing. Wilson likely has another five years left in the NFL. The Giants, essentially, would be trading away two years of first-round draft picks for five or more years of stability at the quarterback position. For this reason, the trade idea is something the team should at least consider.

Russell Wilson might be 33-years-old, but he is still a top quarterback. Wilson is only a year removed from a 2020 season that saw him toss a career-high 40 touchdown passes and lead the Seahawks to a 12-4 record. Russ has never had a losing season as quarterback of the Seahawks and has never missed a start until this season. Russell Wilson is a proven winner and durable son-of-a-gun.

â€œRenegotiating a deal that works out for all parties is something that would have to happen for any of this to work.” – an NFL executive via Matt Lombardo

The Giants need to consider this trade

While the Giants might not have the salary-cap space to acquire the Seahawks’ legendary quarterback on his current deal, it is assumed that Russell Wilson’s contract would be reworked and restructured to make the deal occur. The New York Giants might not be the front-runners to land Russell Wilson, but this is a trade the team needs to at least consider negotiating.