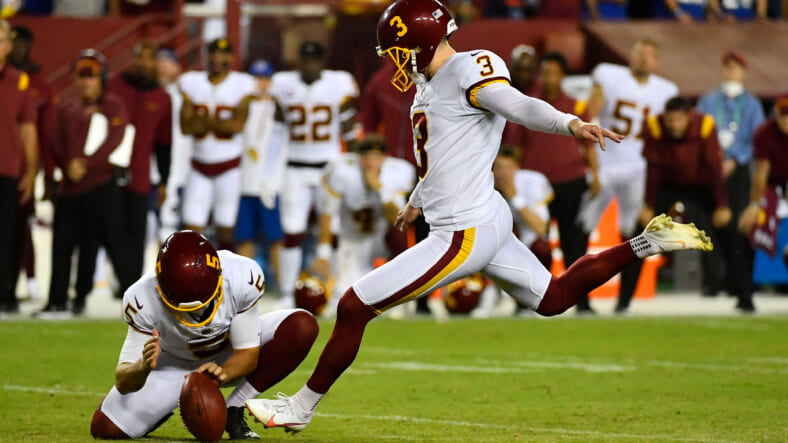 As if the loss against the Washington Football Team couldnâ€™t get any worse, former New York Giants kicker Lawrence Tynes confirmed with a team source that the offsides called against Dexter Lawrence in the waning moments of the game was botched.

The Giants, who fell 29-30 to Washington to mark their second consecutive loss to start the 2021 season, are now staring a major deficit in the face. Allowing backup quarterback Taylor Heinicke to post 30 points on a top-10 defense from 2020 is quite problematic. Heinicke finished with 336 yards, two touchdowns, and an interception. He entered the game with three touchdowns in his career, nearly doubling that against a vulnerable Giants unit.

The Giants shouldâ€™ve never provided kicker Dustin Hopkins with an opportunity to finish off the game, but the offsides called against Lawrence was a mistake, and the Giants will likely be hearing from the league office to tell them as much.

As you can clearly see, Lawrence reacts at the exact moment the long snapper begins his motion, which is entirely legal. Lawrence was, in fact, in an onside position that wouldâ€™ve resulted in a missed field goal attempt from 46 yards, winning the game for the Giants and sending them to a 1-1 record as they prepare to take on the Atlanta Falcons at home next weekend.

Just confirmed with a Giants source that Dexter Lawrence was NOT offsides (coaches film).

The referees missed it and the Giants will get the obligatory phone call from the head of officials saying, sorry we missed it. ??#TogetherBlue

This controversial decision sparks an entirely new debate regarding the use of technology in the NFL. Ultimately, having a second look at plays like this must be a necessity, especially when it can change the course of a game and affect a result.

From the angle provided, you can clearly see that Lawrence reacts almost simultaneously with the snapping off the ball, but from a horizontal viewpoint, it confirms that he was onside. The umpiring crew missed several calls in this game, including a roughing the passer penalty on Chase Young that was undeserving and a holding call on a touchdown run by Daniel Jones on receiver CJ Board. If the referees get these calls right, the Giants walk away easily with a victory, which is a serious issue for the NFL.