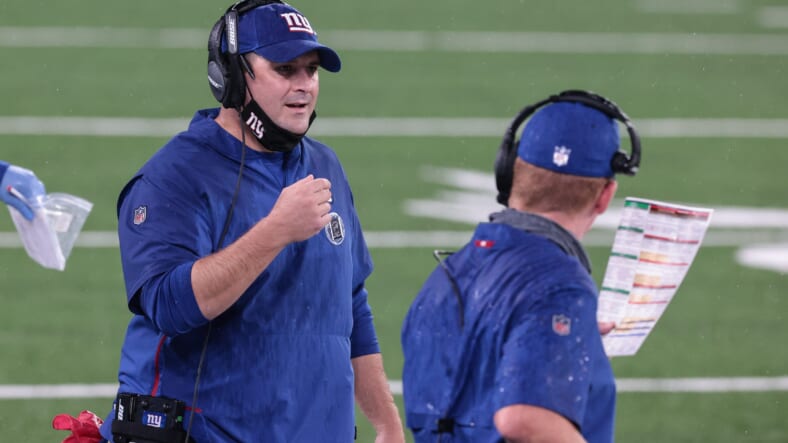 The New York Giants were embarrassed on national television on Monday evening against the Tampa Bay Buccaneers, further plummeting an organization that is gasping for air after years of incompetence.

With management failing to find the right front office executives to put the team in the right direction, the Giants now face another harsh reality, the firing of their general manager and several coaches to try and right a ship that has capsized continuously the past few seasons. The team now sits at a measly 3â€“7 on the year, coming off a 30â€“10 loss to Tampa.

With two weeks to prepare for this matchup, the Giants seemed as if they didnâ€™t even have a plan, failing to execute in every stage of the game and giving the Buccaneers arguably their easiest win of the season. Offensively, quarterback Daniel Jones threw for just 167 yards, one touchdown, and two interceptions. One mind-blowing statistic is that left tackle Andrew Thomas has more touchdown catches than Kenny Golladay and Kadarius Toney combined this season. Golladay signed a four-year, $72 million deal with Big Blue, and Toney was drafted 20th overall to provide elite play-making abilities.

Since the beginning of the 2020 season, the Giants rank dead last in touchdowns, with 42 total. Coordinator Jason Garrett has failed miserably to develop a scheme capable of sustaining efficiency.

However, the failure to build and construct an adequate team has also raised many red flags, likely spelling the end of Dave Gettlemanâ€™s tenure with the Giants.

The future of the team is incredibly murky, but if wholesale changes aren’t made in the near future, fans may begin to avoid the team like the plague.

Predicting the future for the New York Giants:

First things first, the Giants need to make a change on offense, and it starts with shifting playcalling duties to senior offensive assistant Freddie Kitchens. Kitchens has experience in the past with the Cleveland Browns as their head coach, developing Baker Mayfield.

Kitchens may not be the forward-thinking offensive mind the Giants need, but they simply need something different on offense to work with, as they can no longer allow Garrett to hold back the team with his porous playcalling and terrible strategies. The lack of execution and basic fundamentals the offense displays has to fall on somebodyâ€™s lap, and Garrett is the top man in charge of leading the unit, so this seems like the most probable result of his deficiencies.

The Giants try to maintain their loyalty and class despite awful play and losing seasons. Given that fact, owner John Mara will likely give Dave Gettleman the proper exit, allowing him to retire peacefully at seasons and without making a message transition.

Considering the Giants canâ€™t begin looking at new general manager prospects until after the season anyway, firing Gettleman prematurely may cause more havoc within the organization. I would like to see Gettleman fired as much as the next fan, but this is the most likely course of action for upper management.

3.) Allow Jason Garrett’s contract to expire, he leaves without any drama

The Giants brought on Garrett for two seasons to help develop Daniel Jones and curate a successful offensive unit. His failure has dragged the Giants to the bottom of the NFL, arguably worse than the 0-9 Lions.

If not for stellar defensive play at times, the Giants would be staring the potential No. 1 pick in the face, but it is possible they are in the top five for the second time in four years.

At this point, Big Blue needs to consider bringing in a young mind that can put together an offense capable of putting up more than 20 points per game. Thereâ€™s no faith left in Garrett, and even head coach Joe Judge was willing to fire a bit of blame his way after the defeat to Tampa.

Once the season ends, expect the Giants to begin a diligent search for a new offensive coordinator and general manager. Thereâ€™s no guarantee Judge will remain with the team after this year, but finding a new GM will be a priority. Many claim they want ESPN analyst Louis Riddick, and while he will likely be a prospect, his outward love for Dwayne Haskins and hate for Andrew Thomas bubbles the surface when considering him.

There will be a few solid options available, and given the Giants have two first-round picks, the job could have some attractiveness. Nonetheless, they are cash-strapped and still have to make a decision on Daniel Jones moving forward, but with the right coaching staff, they could see the best of DJ. However, at this point, the 3rd-year QB is shell-shocked as a result of bad offensive line play, and there’s a chance he may never recover.