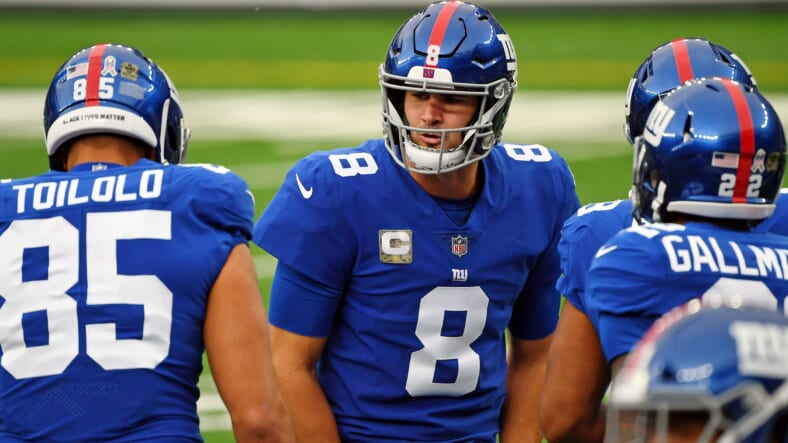 Looking ahead at the New York Giants 2021 regular-season schedule, their upcoming game against the Atlanta Falcons might be their best chance to secure victory and begin to shift momentum.

After two consecutive losses to the Denver Broncos and Washington Football Team to open the season, the Giants are barely treading water as they prepare to take on the New Orleans Saints, Dallas Cowboys, Los Angeles Rams, and Carolina Panthers consecutively. That is not even to mention their matchups against the Chiefs and Buccaneers in November. They need to begin playing clean football without self-inflicted wounds, which have severely limited their success to start the year.

With head coach, Joe Judge guaranteeing a disciplined unit and a product fans would be proud of, starting the year with two losses isnâ€™t exactly what he predicted. However, thereâ€™s plenty of time to turn the ship around, and the Falcons present a perfect opportunity to do so.

With Eli Manning having his jersey retired at halftime against Atlanta, the Giants have a few goals in mind to overcome a team that has given up an average of 40 points through two games. Last week, they gave up 48 points to the Tampa Bay Buccaneers, and with the Giants securing 29 points against Washington last week, their offense has a clear-cut advantage.

What the New York Giants will be trying to accomplish:

To start, Daniel Jones needs to piece together another consistent game throwing and running the football. He nearly had two rushing and passing touchdowns last week if not for a costly drop and holding penalty on WR, CJ Board. Establishing the running game, controlling the clock, and winning the turnover battle must be the priority.

The Falcons will be without starting corner AJ Terrell and receiver Russell Gage, presenting a few match-up advantages on both sides of the ball. Terrell has been their best boundary corner this season, not allowing a reception last week against the Buccaneers. With him missing the game, the Giants should have a field day in the passing game, but running back Saquon Barkley should also take advantage of a unit that is averaging 127.5 yards allowed on the ground per game.

Overall, the Giants need to play a disciplined and clean game in Week 3, changing the narrative after a messy start to the season. In addition, the defense, who was expected to be a top-10 unit entering the year, has disappointed massively. Matt Ryan threw two interceptions which were taken for touchdowns against Tampa, so the Giants have a tremendous opportunity to right the ship and reset the clock on their season.